The death of yield?

Holding a term deposit right now is not much better than keeping cash under the mattress. Even with that extra mattress protector of a government guarantee.

That initiative was introduced by the Rudd Government at the height of the Global Financial Crisis. It was more than welcomed by investors, who rushed towards money markets. It’s not a stretch to say, at times in the years that have followed, we’ve witnessed somewhat of an investor stampede. In the post-GFC world, our appetite for cash yields has only gotten stronger and stronger.

Breaking the wall of cash

Term deposits are ‘rest easy’ guarantees. When the proverbial hits the fan, there’s a silver lining. Silver is nice, but what about the rivers of gold? Whether rates are lower for longer or lower forever – no one has a crystal ball –the fact of the matter is, right now, there’s no gold to be found in term deposits.

Panning for gold in money markets is now a pointless pursuit. And with every downward cash rate move, it only becomes harder for investors to move upstream.

Just shy of a decade ago, one major bank was offering term deposits paying 8%. When that super sweet and limited-time-only deal matured five years later, investors faced a dilemma. Dive into risk assets and risk dangerous splashback when markets inevitably correct, or go about business as usual with another term deposit offering a rate of return cut back by a third?

In 2019, it’s even worse. Most term deposits are paying less than 2%, barely keeping pace with inflation.

But we keep signing up for more. And really, who can blame people? Everyone wants to sleep easy at night. Especially self-managed super fund holders, who understandably don’t want to roll the dice on hard-earned portfolios. 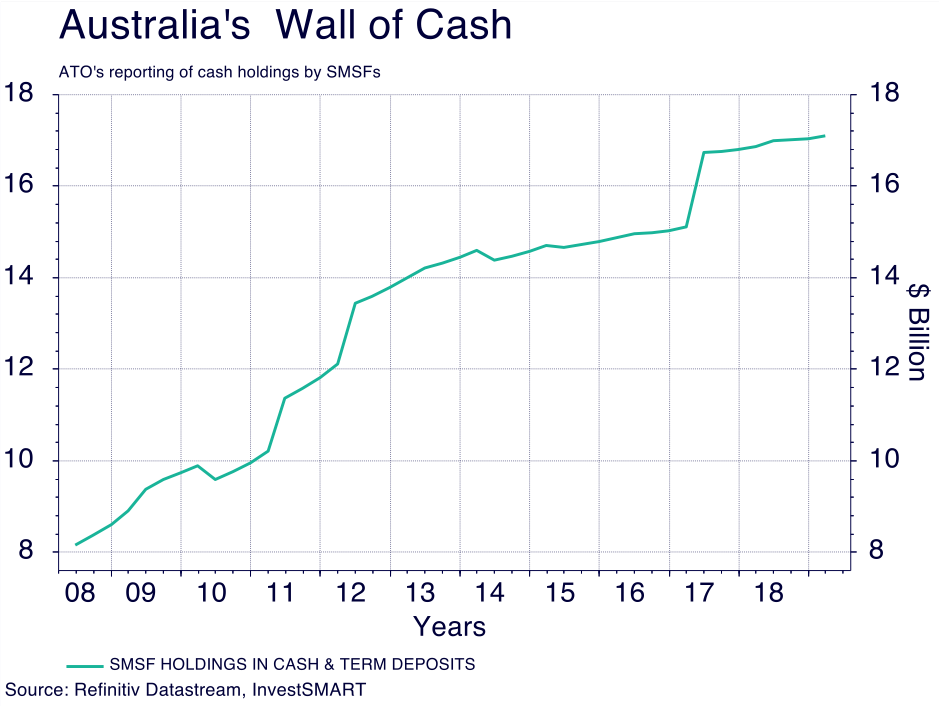 However, we should highlight that figure from the ATO was released before the latest rounds of rate cuts from the Reserve Bank of Australia to the official cash rate.

The RBA has stripped 50 basis points, or 0.5%, off the cash rate since June 2019. That means 50 basis points off the average term deposit at the same time.

The following bar chart shows the current range of Australian term deposit rates. If we’re being honest, they make for pretty bleak reading.

If you fancy having a cuppa out every now and then, this would hardly be enough to cover your habit.  What’s more, 2.15% isn’t even your ‘real’ return for the year.

Remember, inflation will increase over the same period. Core inflation in Australia, which is inflation excluding food and fuel, is currently tracking 1.6% year-on-year.

If that isn’t painful enough already, there’s another way to look at it. Let’s take the average 12-month and 3-month term deposits on offer, adjust for inflation, and you have a medical-grade flatline. 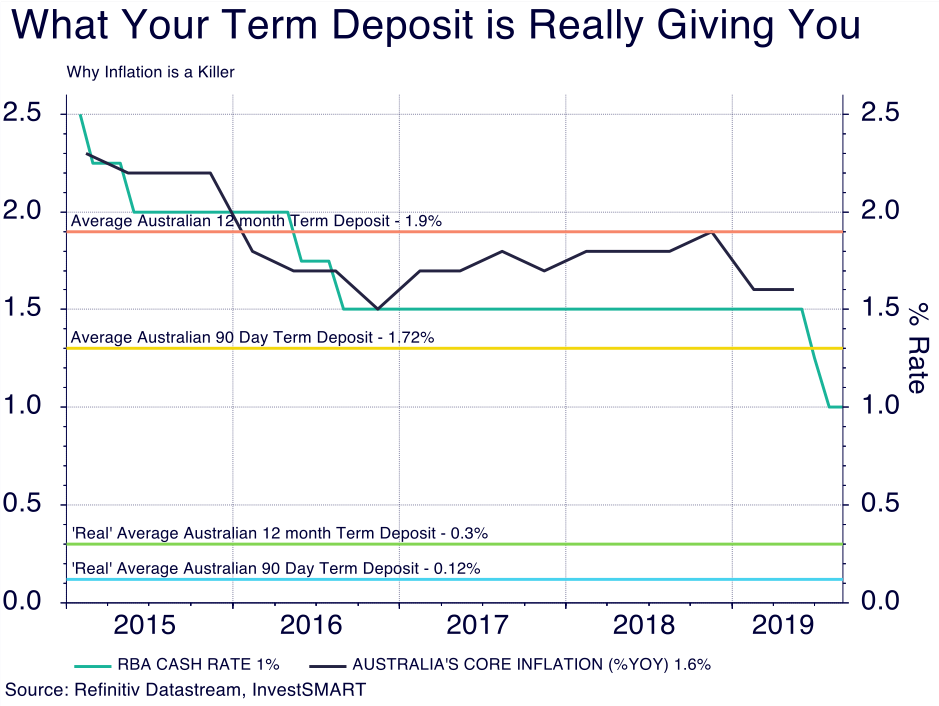 ‘Real’ annual returns are barely above water. And Australian savers must brace for the worst, with the RBA forecasted to cut rates again in the next 12 months.

If banks slashed their term deposit rates again by the same margin, then your real rate becomes even more damning. For argument’s sake, let’s say the RBA cuts the cash rate by another 25 basis points (0.25%) to 0.75% and the banks follow suit to reduce all term deposits by the same measure. The average 12-month rate would fall to 1.65%, and the average 90-day rate to 1.47%.

How to revive your returns

There are relatively safe ways to revive your rate of return.

If you’re rolling over your term deposit and you intend to keep doing so over the coming five or more years, then it might be in your interest to move into a more balanced investment vehicle. A balanced vehicle would have an even split between defensive and growth assets, with both yield and capital growth.

The InvestSMART Balanced Portfolio is designed to perform in good times and bad. It’s designed to give you better returns in an appreciating market, while providing a buffer with its defensive components.

Since inception, the InvestSMART Balanced Portfolio has returned an average of 7%, with an average yield of 3.2%. These are promising figures in an environment where your yield could alternatively fall to zero over the coming years.