Portfolio Update October 2019: White Knights saving us from what again?

Historically, October is in the top two worst months of the year - May being the other. However, the 2019 enigma was again on display last month, as the initial collapse was quickly bid up and global markets started to question if the selloff was justified. October ended in the red, but the momentum it built through the middle of the month has already filtered into November.

With less than two months to the end of the calendar year, it is worth pointing out just how strong a year 2019 has been. The equity-led appreciation is on track to be double the yearly average in Australia. The US is on track for its best year of the last three and has led all comers once again in 2019. 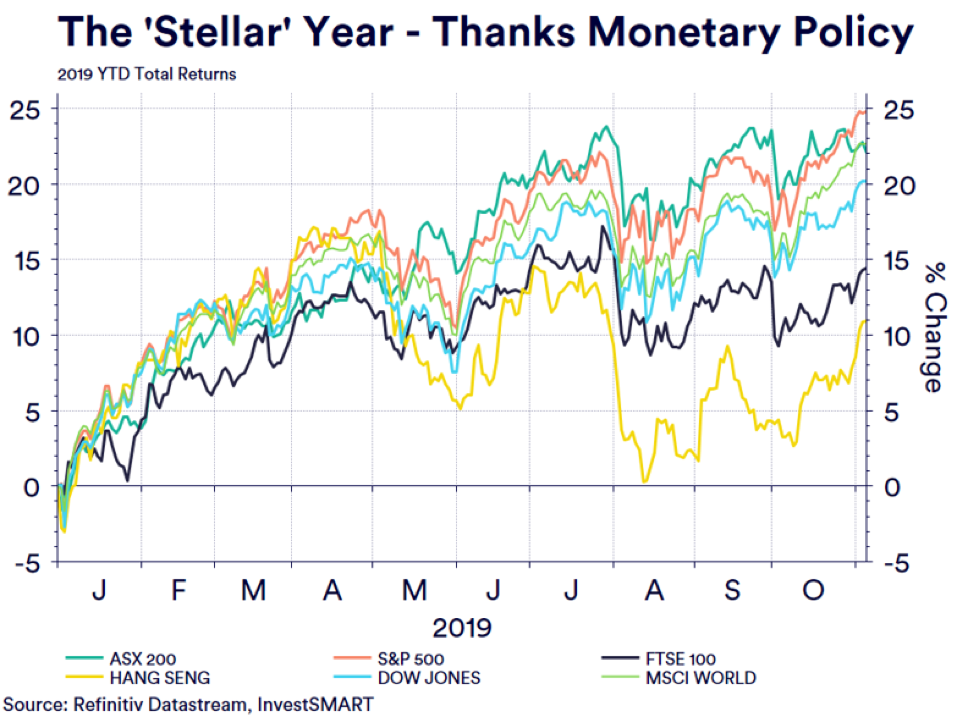 The boon in equity markets is happening with a backdrop of ‘consumer worry’, ‘growth conundrums’ and geopolitics at the ‘worst level since World War II’ according to the former Speaker of the House Commons (regarding Brexit) but could also be levelled at the issues in Hong Kong and the US-China trade tensions.

That ‘great white knight’ in monetary policy has well and truly ridden in on its steed, with five of the eight largest central banks cutting their respective cash rates in 2019. In October the Reserve Bank of Australia (RBA) and the Federal Reserve both enacted a further 25-basis points (bps) cut to their respective cash rates. October was the RBA’s third 25bps cut in five months, it was the Federal Reserve’s third 25bps cut in three consecutive meetings.

These actions have flushed markets with cash once again and is backstopping any sell offs in equities in particular.

What is rather interesting about the ‘action’ is the ‘proactiveness’ of it. As we have to ask: are things really going to get that slow in the coming years?

The RBA certainly thinks so and has ‘tried to get ahead of the curve’ with its rate cuts in 2019. The same argument has been put forward by the Federal Reserve, the European Central Bank and in a surprise move to start November, the Bank of England, although they are yet to pull the monetary policy lever.

Yes, there are clear signs of slowing in certain areas like consumption, and wage growth is flattening out.

But, and this may explain why markets are starting to latch onto the next market wave, what if the slowdown is temporary, things reflate in 2020 and the global recession that has been forecasted for almost 12 months now, never materialise? The reaction in equities will be that of strength as markets know it is backstopped by central bank monetary accommodation coupled with better economic data and higher corporate earnings.

In fact, market movements to start November could actually suggest this idea is starting to take hold given record all-time highs are being printed in the US.

With seven weeks left in 2019, there is still every chance this year could return 2.5 times the yearly average. With our portfolios designed specially to capture market performance, as well as the most important part of investing – total returns, this could be a very good year indeed for all investors.