With the two year anniversary approaching, we review the current quarter and reflect on the Portfolio's journey so far.

It’s been a tough period for equity returns with the All Ords down 7.28%, and it’s been even tougher at the smaller end, with the Small Ordinaries down 12.75% and the Emerging Index down 18.47% for the financial year to date (including dividends).

The fund’s relative outperformance for the month would’ve been a lot better were it not for IOOF, an integrated wealth management business we’ve been nibbling at over the last few months, which fell by 25% in December after getting into a fist fight with APRA.

We were initially attracted by IOOF’s inertia. Platform assets tend to be incredibly sticky due to the hassle involved with changing. Even AMP’s funds under administration have held up well despite its ‘fees for no service’ scandal.

The market looked to be throwing IOOF ‘out with the bathwater’. AMP had been found to be systematically ripping off its customers and the market seemed to be assuming IOOF was doing so too. But despite an arrogant showing by the company’s CEO at the Royal Commission hearings, and a media sideshow about handwritten board notes, there was little evidence of any systemic wrongdoing by IOOF.

APRA’s move to disqualify key IOOF directors, and impose license conditions, caught us by surprise, especially given IOOF track record of being good stewards of shareholder’s capital and maintaining an amicable relationship with the regulator.

The news throws IOOF’s takeover of ANZ’s wealth business into jeopardy, but we’re less sceptical of its impact to value than the market is. Even in the worst-case scenario, where the acquisition falls over completely (and ANZ returns IOOF’s $800m), you’d need to see savage remediation payments and asset outflows to make IOOF a bad investment, and we consider them unlikely.

Uncertainty and risk are not the same thing, and at current prices, IOOF is brimming with the former but not the later.

Reflections on the journey so far

It’s been nearly two years since some Intelligent Investor analysts got together to build a concentrated portfolio of our best small company ideas, so it’s as good a time as any to reflect on the journey so far.

After kicking off in February 2017, the fund got off to a bang with takeover offers for our two largest holdings, Touchcorp and Rubik Financial, in the first month, and strong surges in Jumbo Interactive and Academies Australasia rounded out a good first year. But a torrid 6-months from January to June 2018 saw us give back all of our outperformance, and we now find ourselves underperforming the benchmark by 3.89% p.a. As many of our investors joined later in the journey, most have only had a negative experience. 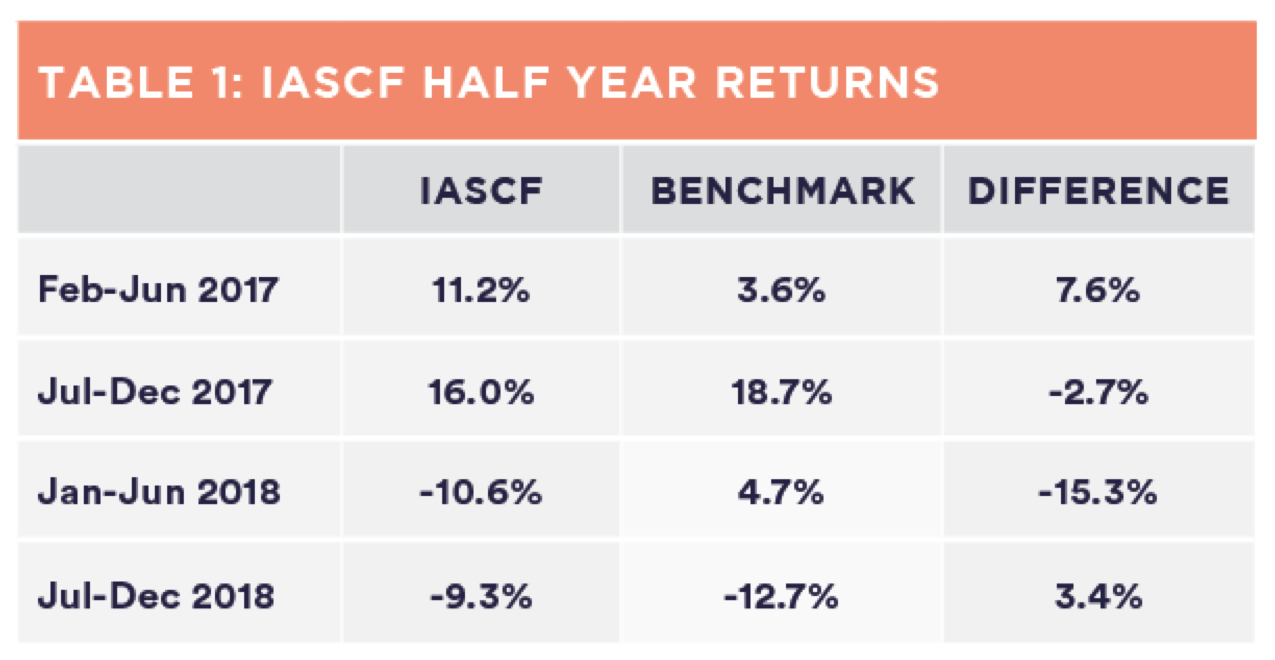 The destructive 6-month period, where the fund lost 10.6% while the index marched ahead, was largely due to the underperformance of three stocks: iSelect, amaysim and CSG Limited.

Whether the original investment cases were sound is up for debate. But what’s clear is that we failed to respond to deteriorating prospects, which for iSelect and Amaysim, was made all too clear by the behaviour of insiders.

iSelect’s CFO departed in November 2017 and other senior executives shortly followed, as did a nasty downgrade in February 2018 and again in April. Amaysim’s CEO sold all of his fully paid shares after completing a large debt-funded acquisition, just six months before the core mobile business hit the skids.

Glossy result presentations depicted prosperous futures for both businesses but the insider’s behaviour told a different story. As Nassim Taleb says “Don’t tell me what you think, just show me what’s in your portfolio”, and for these managers, it certainly didn’t contain their employer’s shares.

Had we been more attentive to these signals we could have minimised the severity of our losses by reducing our position size. There’s a chance we could have sidestepped them altogether. But we failed to do so and it cost you, and us, dearly.

It’s possible that complacency was at play. A good year in the bank may have caused us to relax our guard at precisely the wrong time. Commitment bias may have also been a contributor. iSelect and Amaysim featured regularly on Intelligent Investor’s buy list, which may have made it harder to reverse course after regularly singing their praises. It's also possible that we're guilty of 'thumb sucking', to borrow a phrase from Warren Buffett, precisely when swift action was needed.

After much soul searching, we’ve made a number of improvements to our investment process to rectify these issues. We now pay much closer attention to the incentives and activity of insiders, and it’s already leading to better outcomes.

We took a close look at Integrated Research throughout last year but held off largely due to the large share sales by its Chairman, and caution here has helped us sidestep a 60% drawdown. We’ve also maintained a position in Academies Australasia despite its hefty gains, as we’ve given more weight to the CEO’s relentless buying.

We’ve also changed our management structure as we announced in August. A Chinese wall has gone up to separate the Intelligent Investor publication team from the newly created funds management team.

I’m now directly accountable for the fund’s performance, and with 90% of my net worth either invested in the fund, or directly in its investee companies, I care about its success at least as much as all of our investors. 2018 is a sore spot that we’re eager to put behind us.

Getting ahead of the index won’t be easy but it’s far from insurmountable. What gives us confidence is the pond we fish in. Small companies offer the potential for rapid, outsized gains, and sometimes, all that is needed to turbocharge their earnings or turn investor sentiment is a single announcement.

Audinate’s growth could take off as the shift to digital accelerates. MSL Solutions could win a few golf handicapping contracts with the leading European associations. Thorn Group could settle its class action and shift its focus to rewarding shareholders.

It might take years for us to get ahead of our benchmark as we slowly reclaim underperformance bit by bit. Or it could all come at once. We’ve generated 8% in a month before and there’s nothing stopping us from doing it again.

We’re now tasked with finding a suitable replacement for Trade Me, which we’re set to sell in the coming months as it gets taken over by Apax Partners.

The recent downturn in equity prices has made the search somewhat easier. Businesses are more reasonably priced which enhances their future returns, and investors are behaving skittishly at times which can create juicy mispricings. We’ve noticed capitulation selling in a few pockets, which has us salivating over the prospect of finding a few gems amidst the rubble.

But despite sporting a lower average price-earnings multiple, the market remains ‘polarised’ as most businesses seem to fall into one of two groups: those with obvious appeal that are priced for near-flawless execution, and those with obvious challenges that are priced for a hopeless future. The former group has been a more rewarding place to be to date, but there’s no guarantee that what has worked will continue working.

We’d prefer to add another business that shares Trade Me’s quality and long term growth potential, but it’s a hotly contested area which offers rare mispricings. So we may have to sit on higher cash levels than we’d like in the short term, as we wait for an opportunity that meets our criteria.

With that said, we have already been nibbling at a few market-leading names as they inch into buying range, and we’d be happy to continue buying if prices weaken further.