The curses of concentrating on cash

The latest ATO statistics show some trustees are placing far too much faith in cash. If they are fearful of erratic returns, they should be more worried about the risk of running out of money in retirement.

The latest ATO statistics show some trustees are placing far too much faith in cash. If they are fearful of erratic returns, they should be more worried about the risk of running out of money in retirement.

HOW IS SELF-MANAGED super evolving? When there are nearly 560,000 DIY super funds in Australia with more than 1 million members, keeping track of the health of the system is a massive task. Those funds hold 29% of all super assets, or about $600 billion in wealth, so it’s very important to rake over the statistics in search of warning signs.

That task is handled by the Tax Office, which recently issued its annual round-up of all the numbers that matter for the 2013-14 tax year.

The average assets per SMSF ticked past the $1 million mark during the year, and nearly 31,000 more funds existed at the end of the year than at the start. Nearly 70% of SMSFs have been running more than five years, and 44% for longer than 10 years.

The sector is maturing, and incrementally more funds are shifting into pension phase having benefited from steering their own affairs with a little help here and there. The notion that individuals can manage their own wealth looks to be well founded. Until you look a little closer…

Lurking deep within the ATO’s multi-layered spreadsheet of aggregate data is evidence of a dangerous trend.

Far too many DIY super fund members have parked their wealth in cash and term deposits and left it there. Are they getting the most out of their money? No way.

With cash deposits earning marginally more than inflation, super fund members with high allocations to cash risk a real rate of return — which is the buying power a dollar invested today will have on the day it’s finally withdrawn for use — of zero.

A portfolio which is heavily concentrated in cash may sound safe but it isn’t. Instead of the risk of price variance for investments where their value is discovered in an open market, such as shares, or from recent sales activity such as property, the risk of being heavily invested in cash is that your balance in the future will be almost guaranteed to be lower than any form of properly diversified portfolio.

A different type of risk

The ATO data shows nearly a third of SMSFs hold more than half their wealth as cash, and 11% of SMSFs are 100% invested in cash for heaven’s sake. They may be mad keen to avoid risk, and there’s nothing wrong with that, but even the most conservative investor would be better off in a diversified low-risk portfolio than put all their faith in term deposits.

The chart forecasts the outcome for $100,000 invested wholly in cash and compares it to four InvestSMART model portfolios, based on historic returns and taking into account the effects of inflation. 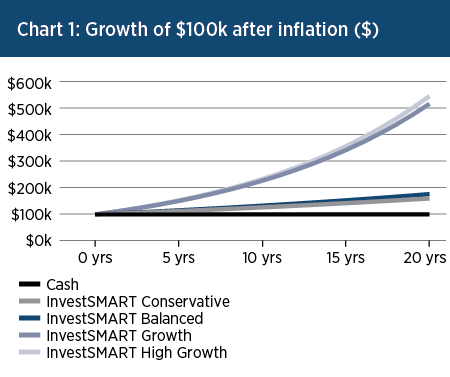 Diversification is a discipline which saves portfolios in all market conditions, and inflation is a curse which erodes cash returns more than any other asset.

Self-managed super trustees need to understand the risk in holding way too much cash is that a lifetime of contributions will be worth so much less than they could have been, just when they are needed the most.