Everyone is prone to the dark force of "sequencing risk", unless they take a simple step to lessen its potential to damage retirement savings.

Does it matter when you retire? If you have enough saved and have reached a socially acceptable age at which to finish working then, no, it probably doesn’t matter when you stop earning an income.

They each had $500,000 in savings and were buoyed by the possibilities for Australian listed companies. Each of them had all of their wealth invested in the Australian All Ordinaries index and withdrew 5% of their capital a year for living expenses.

How are they going today?

The three have plenty of money to last them until the inevitable but their balances are vastly different.

Mary retired seven months after John, with the same savings, but now she has $750,000 more than he does — close to twice as much.

Harry was the last to stop work and has been drawing on his savings for less time than all the others, but his balance is $489,000 below Mary’s and $261,000 above John’s.

A FORK IN THE ROAD

The difference in outcome is all down to sequencing risk, a tyrannical dynamic of investing that affects people at all levels of sophistication.

Very roughly, it says: if you are invested in the market, the outcome is solely reliant on when you entered the market.

And so we see although John and Harry have been in the same market for 25 years, Harry is today $261,000 better off because he jumped in nearly two years after John, who invested his lump sum days before the crash of October 1987. Five months later, his investments were worth 45% less.

Mary has fared best of all, of course. It just so happens she got in on the rebound. Five months later she’s already made 31%. It was a great start. And it was probably plain good luck. For John, it was plain bad luck that he retired when he did.

NO DEFENCE AGAINST BAD LUCK

A dramatic market sell off is no good for anyone who is heavily invested in equities. If regular withdrawals are made to cover living expenses, the sooner a sudden drop in the market occurs after the investment is made the harsher the consequences. Withdrawals will further diminish capital that has already taken a hit. It’s harder to get out of a hole if it’s just become a bit deeper.

Someone who has a few years of good returns will have a higher base to recover from.

Sequencing risk is a dark force and if you want to hold risky investments it’s impossible to avoid. Unless...

The effects of sudden market slumps, as happened in 1987, or prolonged downturns which experts struggle to understand until years later, like the global financial crisis, can be lessened if funds are split between asset classes in a diversified portfolio.

How would John, Mary and Harry have fared if they’d all held a portfolio comprised of 60% Australian shares and 40% global bonds? Let’s have a look.

It should be no surprise that a diversified portfolio is less risky, and the evidence here is the narrower range in outcomes for our three retirees. The highest and lowest balances today are $395,000 apart with a portfolio split between shares and bonds, as opposed to a difference of $750,000 when all funds were invested in shares. 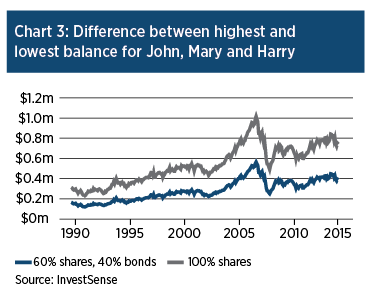 If we know it’s impossible to time an investment for the optimal moment, then one way to reduce the chances of suffering John’s bad luck (of investing at the worst possible moment) is to diversify sensibly or consider a low-cost balanced managed investment, such as the InvestSMART model portfolios.

A well-diversified portfolio will still be invested in risky asset classes, but the inclusion of defensive assets such as cash and bonds should smooth out the ups and downs from growth assets, including local and international shares and listed property.

Chart 3 shows the difference between the highest and lowest balances for our trio, from when Harry stopped work in 1990. A diversified portfolio strategy narrowed the range of outcomes almost by half.

The crash of 1987, which went down in history as Black Monday, was an extreme event. The fact that sophisticated investors suffered alongside mums and dads is proof that no-one can predict the share market. It would be easy to find many retirees that fit our made-up scenario. Around the world there would be thousands of them. If John, Mary and Harry had been solely invested in the global share market index the outcome for the three of them would have been worse, but far less varied (which isn’t to say international shares are not a worthy inclusion in a portfolio).

The fact is no-one can avoid sequencing risk, but everyone can reduce its effects through considered portfolio construction or by using a low-cost balanced model portfolio.