If your finances are conservative and you can take a long-term view, then downturns should be thought of as nothing more than the wonderful, rare buying opportunities that they are.

Marko Kolanovic is an analyst at JP Morgan who’s been analysing the link between fake news and market movements.

“To some extent, we trace the disconnect between negative sentiment and macroeconomic reality to the reinforcing feedback loop of real and fake negative news,” Kolanovic says.

Domestic political opposition may have an interest to paint a negative economic picture, individual market analysts gain more visibility and coverage with negative calls, and foreign adversaries amplify a negative news cycle in order to foster divisions and erode confidence in financial markets and the economy.

“There are specialised websites that mass produce a mix of real and fake news. Often these outlets will present somewhat credible but distorted coverage of sell-side financial research, mixed with geopolitical news, while tolerating hate speech in their website commentary section. If we add to this an increased number of algorithms that trade based on posts and headlines, the impact on price action and investor psychology can be significant.”

The trade war between America and China makes great headlines. They are the world’s two biggest economies, and their leaders are arguably the world’s most powerful.

Yet, according to Platinum Asset Management’s maths, Trump’s original tariffs amount to a nominal tax on the US economy of just 0.16%. That’s only a fraction of the 0.9% annual benefit to GDP for the first four years of the individual and company tax cuts. Of course, things can get much worse, but there’s a yawning gap between the headlines and the economic reality.

The latest headline grabber is the risk of a US recession due to the slowing housing market. I’m going to write more about this in the upcoming quarterlies but, for now, note that consumer spending makes up around 70% of US GDP. As Ben Struble of Struble Asset Management recently explained (and whose charts we've reproduced), with unemployment falling, wages finally increasing and Social Security payments about to get an inflation-adjusted bump, the US consumer looks good in 2019.

Despite a decade passing since the GFC, the US residential construction market has only just reached a level consistent with historical troughs measured as a proportion of GDP. At just 4% of GDP compared to 7% at the peak of the 2007 property bubble, America needs more homes, not less.

Government spending produces 17% of GDP, and as Chart 2 shows the spending taps are running freely. That means a fall in business spending (see Chart 3), which also creates less than 20% of GDP, is also unlikely to derail the economy.

Chart 4 also shows that the current recovery since the GFC has been extremely weak by historical standards, which suggests it could run much longer than average. That it’s long in the tooth is not a reason to expect it to end suddenly, particularly with Federal Reserve chief Jerome Powell surprising everyone recently by suggesting interest rates were near the neutral rate. This was the opposite of what he’d said months earlier, suggesting there might not be as many interest rate increases in the pipeline as expected. 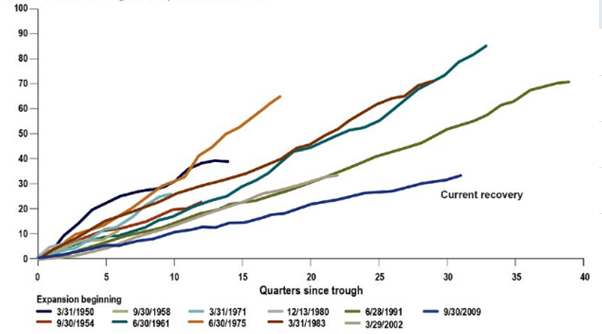 But what about the housing market at home? So far, the falls in Sydney and Melbourne have been tiny compared to the massive gains of the past decade and bad debts are plumbing record lows.

Given the GFC is still vivid in most people’s minds, surely we learnt that property prices don’t just go up and that it’s not good policy for homes to be unaffordable for so many; i.e. should we really be surprised that house prices are coming off the boil?

Smaller falls earlier in the cycle over longer periods prevent booms and busts. That means bad debts don’t pile up at the banks and threaten the stability of the financial system.

With prices falling more rapidly this month, perhaps the reduction in credit that’s reducing house prices is too little too late. But so far, it’s mainly been investors getting out of the market, which is a healthy, long-term development for many reasons, such as increasing affordability for home owners and reducing speculative loans.

If the worst comes to pass, just last week the RBA effectively announced that it would follow the US playbook of quantitative easing (QE). While things should never have been allowed to escalate to the point where QE is a consideration, the silver lining would be the incredible opportunities for stock market investors. Put another way, if your finances are in good shape and you have plan, you have nothing to fear from a downturn.

While there’s no point trying to predict these events, you can prepare for them by writing down a plan while you’re not under any stress. That way it’s easier to implement it when markets are falling seemingly without end.

How long is too long?

Columbia University Professor Bruce Greenwald once remarked that value investors should always be happy. In a downturn stocks are cheap and there’s lots to buy. In a bull market your stocks are going up and you’re rich, or at least richer.

If you’re not satisfied with your recent investment returns, the historical track record of legendary investor John Templeton is encouraging. Remarkably, as you can see from Chart 5, it took 14 years before Templeton broke even with the market. 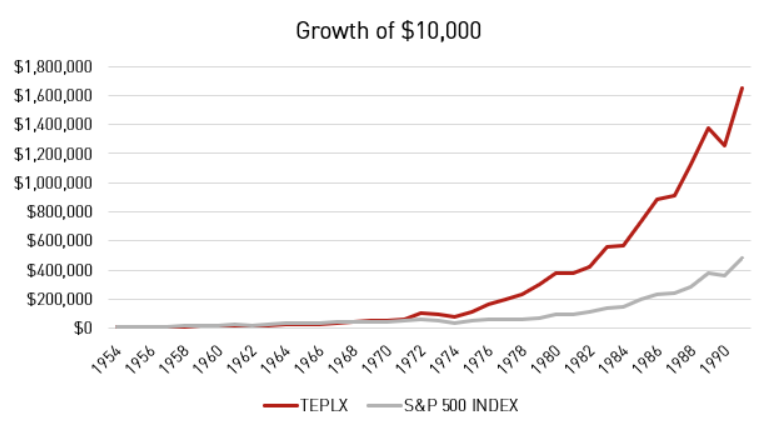 There’s an important point to make about investing in the modern world that’s as old as time. The reason most people aren’t good investors is not because they can’t recognise a good business or fund manager or understand risk. It’s because they fail the behavioural side of investing, which I’d guess determines 80% of your results.

Most people simply don’t have the perseverance, grit and patience to hold for the long term. They try to time markets, and they get frustrated with short-term performance, even though short-term share price movements are random.

The price for outperforming the market in the long term is often under-performing in the short term. I remember castigating myself for years when the share price of Aristocrat fell 70% after my initial recommendation. Little did I know it would increase 15-fold from the bottom, to over four times the price of my original recommendation.

As Warren Buffett said, ‘No matter how great the talent or efforts, some things just take time. You can't produce a baby in one month by getting nine women pregnant.’

I wish I knew how to make money fast, but I don’t. But I do know that the increasing short sightedness of markets is going to produce more opportunities as quantitative tightening means we can no longer rely on expanding price-to-earnings ratios to produce high returns.

The only people that should worry about a downturn are those who are heavily geared, or who need to cash in their investments within a five-year period – in which case they shouldn’t be invested in the stock market. Buffett warned that ‘You shouldn't own common stocks if a 50% decrease in their value in a short period of time would cause you acute distress.’

If your finances are conservative and you can take a long-term view, then downturns should be thought of as nothing more than the wonderful, rare buying opportunities that they are.

In the Christmas spirit, I offer you my 2019 forecast.

Things will be much harder over the next five years than they have been over the past five, as high valuations for all types of assets compress. But don’t get frustrated, stick to your plan, keep your return expectations modest, don’t take excessive risks, and, as Mick Jagger sang, ‘you can’t always get what you want, but if you try sometime, you find, you get what you need.’

Have a happy and safe Christmas break, and please call us on 1300 880 160 or email us on support@investsmart.com.au if you have any questions about the funds. Next year promises to be full of opportunity, even if it doesn’t feel like it at the time.

For more information on Nathan's Portfolios, click the below links: