How to take advantage of the "new mediocre" global growth

For a few months now, the RBA has commented in its statements that financial volatility was lower than could be justified. After some extreme movements in global financial markets since last Thursday night, I can assure you that this is no longer the case. It wasn't clear when, why or how it would end, but we all knew the preternaturally low levels of volatility would end at some stage.

For a few months now, the RBA has commented in its statements that financial volatility was lower than could be justified.  After some extreme movements in global financial markets since last Thursday night, I can assure you that this is no longer the case. It wasn’t clear when, why or how it would end, but we all knew the preternaturally low levels of volatility would end at some stage.

My Bloomberg App on my phone has been lit up like a Christmas tree over the last week. Red at night before bed, green by the morning, US equities green, European equities red, Treasuries green – they aren’t small numbers either. 3% intraday moves are occurring daily. We have seen the Stoxx 600 rising the most in over three years last Friday night, US 10y Treasuries rallied a monster 35bps intraday last Thursday night, the largest rally since March 2009, WTI crude oil futures have traded below $80/barrel, a level not seen since 2012, and Tuesday night the S&P 500 had its largest rally in a year. The VIX or ‘fear index’ which measures volatility has doubled in the past month as fear grips financial markets that the global economy is facing its biggest test of confidence since the European sovereign debt crisis, investors have been worried that the global economy is running out of steam.

In my opinion, the most surprising thing to come out of the last few days trading activity were the comments from St. Louis Fed Bank President James Bullard, who has historically been quite hawkish, he said the central bank should consider delaying the end of its bond buying to halt the decline in inflation expectations. Prior to the meltdown in the market, he’d been calling for a sooner than later rate hike with no comments about QE. Last night’s surge in U.S. stock prices was due to investors speculating that the European Central Bank will boost economic stimulus – more QE! The market is using QE like a drug, even the thought of the next ‘hit’, sends markets soaring. How any of the central banks are going to extract themselves from this in an orderly way, I just don’t know.

It seems that everybody is finding something to worry about, developments in the Middle East, Ebola, the wrapping up of QE, deflationary concerns in the Eurozone, and in particular, that global growth may remain disappointingly weak. This narrative seems to best explain why, over the past few weeks, oil prices have fallen sharply, equities have dropped, rates have rallied and credit spreads have widened.

At last week’s annual meetings of the International Monetary Fund and the World Bank in Washington, IMF chief Christine Lagarde argued that the global economy is facing "the risk of a new mediocre, where growth is low and uneven". She underscored this point by noting that the IMF has recently lowered its forecast of global growth this year to 3.3% (down from its forecast of 3.7% in January).

Amongst this benign backdrop, bond markets continue to defy market expectations of a pull back. They are still proving to one of the best performing asset classes of the year amid renewed weakness in the global economy. For the year to date, bond returns have moved strongly back into the ascendancy. The UBS Composite Bond Index has returned 5.94%pa versus the ASX 200 Accumulation Index return of 2.96%pa - and the UBS Composite Bond Index is made up of 75% government bonds - the lowest yielding bonds around! I would go so far as saying that the "new mediocre" for growth will most likely be a 'sweet spot' for credit.

So why are bonds performing in this low growth benign environment? Well put simply, benign is fine for credit (bonds). Credit doesn’t need earnings growth, it just needs the absence of a big downturn (i.e. recession).  In times of earnings growth, equities outperform.  In times of flat earnings, credit outperforms. Now, it is important to note here that benign does not mean “bad”, it just means flat.  Flat is bad for equities because equities have an assumed earnings growth rate built into the PE ratio, and that growth rate right now is very high, i.e. lots of risk on the downside if economic growth doesn’t pick up. On the contrary, if aggregate demand were to remain “mediocre”, then inflationary pressure would likely remain relatively dormant, and the removal of monetary accommodation would likely proceed at a more cautious pace, consistent with weaker global macroeconomic conditions. Low yields and accommodative monetary conditions are highly supportive for credit risk appetite.

So global growth is benign, other than the US (and China):

In FIIG’s Head of Markets, Craig Swanger’s, WIRE article today, he writes “Our analysis of the performance of the USD against its major trading partners’ currencies shows a clear pattern: there have been three periods in which the US economy has led the world economy out of an economic slowdown: 1983-85; 1991-93; and 1998-01, as shown in the blue bars below.”

“Each of those periods has marked the start of a bull run for the USD, as you would expect. Less intuitive is the fact that the USD has risen each time far more against the AUD than its other partners. These periods have seen the AUD fall an average of 35%. From its recent peaks, that would result in an AUD/USD exchange rate of 71 cents.” 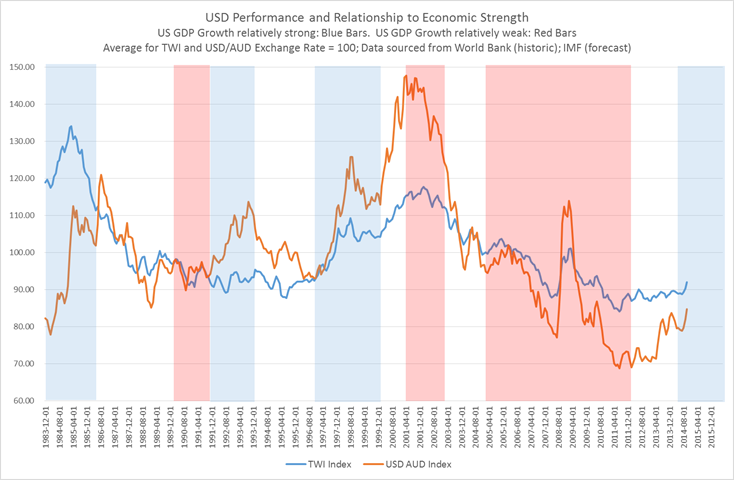 Helping to back up the fact that the USD is still undervalued were comments from Assistant Governor of the RBA, Guy Debelle, in his 14th October speech. Debelle’s commented that “While the US dollar has appreciated, on a trade-weighted basis it is still not that far above its all-time lows reached in 2011. It has only appreciated by 4 per cent in the past few months, which is a small move in the history of swings in foreign exchange rates, where movements of up to 40 per cent have occurred. Similarly, while the euro has depreciated in recent months, on a trade-weighted basis the euro is not particularly low.”

His argument uses the long-term Trade Weighted Index of the USD and points out that it is below long-term averages. He uses 1999-2014 in his speech, which exaggerates how undervalued the USD is, but point is that you don’t need to exaggerate it – vs any long-term average, the USD has a long way to go to get to its average. No guarantees ever exist in FX markets – they are volatile, highly traded over extremely short periods, but they do mean revert and eventually are forced back to fundamentals by trading patterns. With the US and Chinese economies the only bright points left globally, expecting the US to head back to its long-term averages at least is a reasonable assumption. 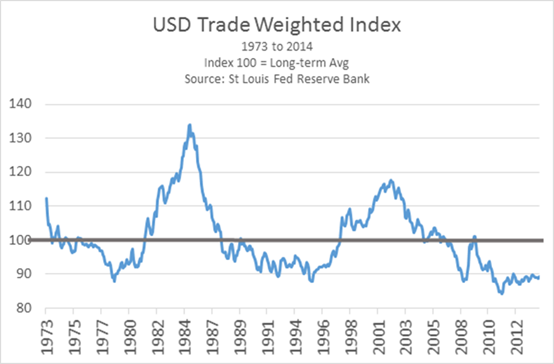 The September quarter CPI report confirmed very benign inflationary pressures in the Australian economy. In a quarter which is typically seasonally very strong ( 1.0% qoq average over the past decade), headline inflation rose by just 0.5% qoq (or 0.1% qoq in seasonally adjusted terms). As a result, annual growth decelerated sharply, to 2.3% yoy from 3.0% yoy in 2Q2014. In context, the rise in headline inflation was 10bp ahead of consensus expectations in the quarter, most likely owing to an unexpected surge in fruit prices ( 14.7% qoq) and other motoring services ( 5.8% qoq), although the weakness in electricity (-5.1% qoq) and fuel prices (-2.5% qoq) was also somewhat more modest than we had been forecasting. More broadly, putting aside strength in prices for food ( 1.2% qoq) and alcohol & tobacco ( 1.1% qoq), inflation in the clothing (-1.0% qoq), household furnishings ( 0.4% qoq), recreation ( 0.6% qoq), communications (-1.4% qoq) and financial services ( 0.6% qoq) subcomponents was weak.

Yesterday’s CPI data puts domestic inflation closer to the RBA’s mid-point of their target range of 2-3% and takes some pressure off the RBA in regards to inflation concerns that last quarter came in at 3.1% yoy. For the RBA such a benign inflation environment keeps open the option of further policy accommodation (i.e. rate cuts) should the risks to growth warrant it. As I have recently highlighted, while our central case is that rates will remain on hold for some time, another cut cannot be ruled out if domestic growth continues to disappoint, the local housing market cools, and global risks intensify. I personally can’t help but think that if the RBA can get the housing market under control, be it by macro prudential lending restrictions, or other methods, a rate cut may well be on the table. This may assist with the uncomfortably high unemployment rate, which is now higher than the US. One thing for sure is that a rate cut would most certainly see a subsequent sell-off in the AUD, which would also help Australia’s terms of trade – the RBA has also made no secret of the fact that they want the AUD lower.

In these sorts of volatile markets, there are two types of investors:

Should you agree with my comments (and others) that we are entering the “new mediocre” of global growth and that this is the start of a prolonged period of AUD weakness, without taking into consideration your personal goals, objectives or circumstances, I would suggest the following bonds as a way to take advantage of things to come.

If you prefer smaller parcels of bonds, Fortescue Metals and Kinross Gold are two alternatives that you may wish to consider.

For more information on these bonds including research, to discuss my comments or to find out how to open an account, please contact me directly.