How does Australia look from overseas? Overweight

Why it pays to diversify offshore.

Australian equities are a favourite investment class for Australians, and it’s obvious why. Money invested in locally listed companies has grown at a faster rate than if it was invested in an index of international companies.

For someone in retirement, who pays no tax, $1 of fully-franked dividend is magically transformed to $1.43. Fantastic! Even better, Australian companies pay about twice the yield as international ones.

So we can all give ourselves a pat on the back for having a “home bias” which pays off, but let’s not get complacent.

Probably the most compelling reason to diversify into offshore equities is that the local share market is so heavily weighted towards banks, which are included in the “financials” sector of the listed space, and miners, which show up in the “materials” sector. 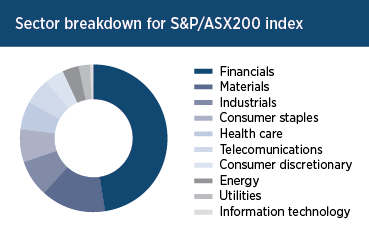 Banks make up close to half of the index. When miners are included, about 60% of the market is covered.

Is that a reason to be alarmed? It depends how the rest of the world is divided up. Let’s have a look.

The chart shows the sector breakdown for Australian and international equities holdings for the InvestSMART Balanced portfolio, where offshore holdings are held in a selection of exchange-traded funds over various geographic regions.

Straight away we can see financials is the biggest sector offshore too, but nowhere to the same extent as in Australia. The InvestSMART Balanced Portfolio’s second biggest sector globally is IT, featuring big names such as Apple, Microsoft, Google, Facebook and so on. Australia’s IT sector is tiny in comparison.

The consumer discretionary, health care, consumer staples and industrials sectors are far more prominent in the offshore markets, and populated by the world’s biggest brand names.

It may feel good to look backwards at the past performance of Australian companies and tell yourself it’s better to focus on what happens at home, but the local share market is way off balance when compared with the rest of the world.

Such a concentration of risk may not be a good thing in times ahead. As long as you can do it cheaply, it is better to buy a lot of great companies across a lot of different industries across a lot of different countries. This type of strategy generally outperforms a more reactive asset allocation whereby investors move in and out of cash to in and out of equities as market volatility moves up and down with market cycles.

InvestSMART Diversified Portfolios, allows investors to get access to some of the world greatest brands in some of the fastest growing industries in the world.