Fed rates lift-off - much ado about nothing or a turning point for bond investors?

Why is it that when China, Brazil, or the US Federal Reserve sneezes, our local stock market gets 'man-flu'?

Why is it that when China, Brazil, or the US Federal Reserve sneezes, our local stock market gets ‘man-flu’?

December is looking like a case in point. The US Federal Reserve raised interest rates for the first time in a decade, the most awaited and talked about economic event that we have witnessed in a long time. It finally happened on December 15th  and led to two surprises for Australia:

One: It had little negative impact on bonds.

Two: US equities swooned at the prospect but ultimately bounced back on the day. If anything Australian banks were hit harder.

There’s a simple explanation for the lack of impact government bond markets: when there’s such a strong consensus market view and it turns out to be accurate, very close to nothing happens (as markets have already adjusted to the expected change).

To put some tangible numbers around this, the IAF Australian Bond ETF where the InvestSMART diversified portfolios have most of their bond exposure, traded within a measly range of 0.25% during December. But maybe that’s because all the action was happening Stateside? Nope. Nothing much happened over there either.

As an aside readers may be surprised that Australian Government bonds and US Treasuries tend to trade in lock-step. The chart below shows the extent of the very tight relationship between long term government yields in the US and Australia. So if something does upset the US bond market we will know about it as Australian bonds often react even more strongly to US economic news than US bonds. In many senses we are not an island after all. 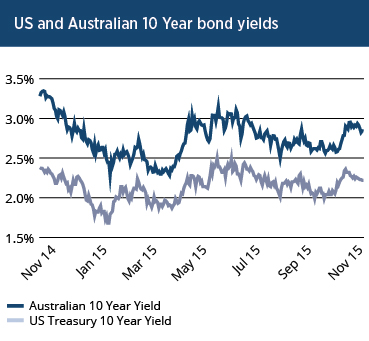 Looking forward, there are two salient points to note:

Firstly, the flipside of what we saw last week is that when there is a strong consensus market view but it turns out to be in-accurate then all hell can break loose. Janet Yellen, the chair of the US Federal Reserve, knows that very well and she has built a consensus around the Fed’s future actions to keep markets calm. However, if the Fed is ever forced to do something that the markets don’t expect, then we will see the very opposite of the muted response we saw in the last week – which makes one wonder who is really in the driving seat now.

Secondly, it will affect Australian investors more than they might think. We recently heard a global bond manager based offshore describe Australian government bonds as simply a leveraged play on US government bonds. That means they are especially attractive if you think US rates are falling, and of course vice versa if you think rates are rising. Think for a moment what that means not only for Australian bond investors but also for the funding rates of Australian companies or the highly extended consumers and home owners. No wonder our banks’ share prices tremble when Janet Yellen coughs.

So do investors need a firm view on what the Fed will do in 2016?

Fortunately, there is a much simpler prism through which to look at government bonds that helps cut through the noise. And make no mistake - second guessing what everyone thinks central banks will do in an uncertain world really is just noise. The following chart compares the yield on local government bonds with a maturity of 3-5 years with the return achieved in the following 5 years. 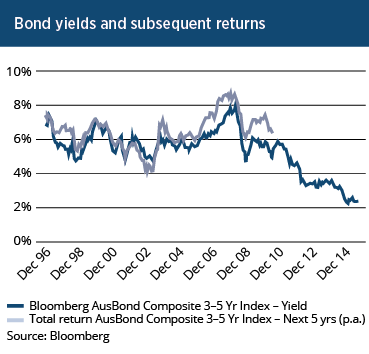 So there you have it that – the close relationship between those two lines shows that there is at least one thing we can predict, assuming of course that the Australian Government is able to repay its debts. For the foreseeable future that seems like a reasonable assumption. Therefore, with yields now approaching 2%, the return from medium-term bonds will be barely more than inflation (currently predicted to be around 2%). We also know that there is the potential for short term losses if the markets start to suspect that rates may rise quicker than currently assumed. So all in all investing in local government bonds doesn’t seem to be an especially good deal for now.

This is the underlying current that has driven investors out of government bonds in search of higher returns, the so-called chase for yield. However, how will rising rates affect higher yielding fixed income and interest rate sensitive sectors (like bank shares for instance) where investors have ended up instead? Indeed there were notable tremors in US high yield markets last week. Defaults have risen sharply this year (particularly in the energy sector) and one high yield fund was forced to freeze redemptions following precipitous outflows (sound familiar?) In this environment we do not think that looking for extra return in overseas corporate bonds will enhance returns without adding even more risk. At some point yields will reach a point that investors are adequately compensated even in these high risk areas, but its probably a bit early.

With these thoughts in mind, we have just completed a portfolio review of the investments in the defensive allocations of the InvestSMART Diversified Portfolios and we have:
- Reduced exposure to Australian Government bonds
- Introduced a managed fund that provides exposure to high quality Australian corporate bonds, where yields are starting to look quite reasonable compared to the risk of default.

Importantly, this fund invests primarily in Floating Rate Notes – this means that if interest rates start to rise then the coupons paid by the underlying companies will also rise. In short, we are looking to maintain a positive yield above inflation while reducing the amount you would lose if interest rates rise (or the market starts to worry that they might rise faster).

We will provide a more specific update for investors who want to know more about the changes. However, in the meantime enjoy the break and be rest assured that if bond markets in the wintery north do catch a cold, we have taken steps to provide some insulation to our portfolios.