Like Brexit, the victory by President-elect Donald Trump was a surprise. Unlike Brexit, however, markets quickly took a positive view and have continued to rise ever since. Investors are betting that Trump’s planned infrastructure spending and tax cuts will combine to pump up economic growth and eventually drive interest rates higher. And when the US Federal Reserve raised interest rates by 0.25% in December, it suggested that a further three rate rises could follow in 2017, reinforcing investors’ increasing interest rate expectations.

The portfolio’s top performer over the first half of 2017 was South32, which rose 76�ter an excellent underlying 2016 result. Rising commodity prices and further cost cuts have helped it rise materially above the $2.13 price it listed at 18 months ago after being spun off from BHP Billiton.

Computershare has so far been one of the biggest beneficiaries of the Trump surprise, rising 38% on hopes that the President-elect’s policies might eventually drive up interest rates. Computershare earns a substantial portion of its profits from the interest on client cash balances – at least when rates aren’t close to zero.

Ansell was another good performer, increasing 38% after its 2016 result suggested an improving outlook and management announced it was considering the sale of the condom division.

Another decent performer was BHP Billiton, which rose 37% as commodity prices improved and, with them, investors’ perceptions of mining and energy companies.

PMP rounded out the top give gainers, rising 30% after announcing a planned merger with larger competitor IPMG, although it is potentially at risk after the ACCC subsequently announced it was reviewing the deal.

At the bottom of the table, OFX Group (formerly OzForex) was the biggest loser, falling 26% after reporting a 21% fall in underlying profit in its interim result. Low volatility in the Australian dollar compared to the US has affected the number of new clients signing up while the fall in sterling since the Brexit referendum reduced the value of sterling-based transactions.

Even before Trump’s victory, infrastructure stocks and listed property trusts declined as investors feared higher interest rates in coming years. This contributed to falls in Sydney Airport (by 13%) and pub owner Hotel Property Investments (by 11%). Sydney Airport was also affected by the Government announcing that the company would have to front more of the cost of developing a second Sydney airport at Badgerys Creek than originally expected.

In late October, the portfolio sold its entire 2.8% weighting in Hotel Property Investments (at $2.84) to purchase a 3.0% holding in Crown Resorts, at $10.70, after some of Crown’s staff were arrested in China.

Finally, to maintain the portfolio’s resources exposure but reduce the skew towards South32, the portfolio reduced its holding in South32 by 1.3% to 4.0% (at $2.58), investing the proceeds in BHP Billiton to increase its weighting to 4.0% (at $24.23). 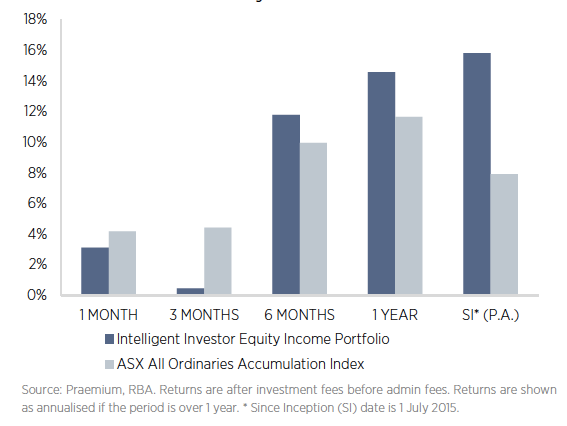 Source: Praemium, RBA. Returns are after fees and before expenses. Returns are shown as annualised if the period is over 1 year. * Since Inception (SI) date is 1 July 2015.