The following article appeared in the Australian on 12 June, 2018 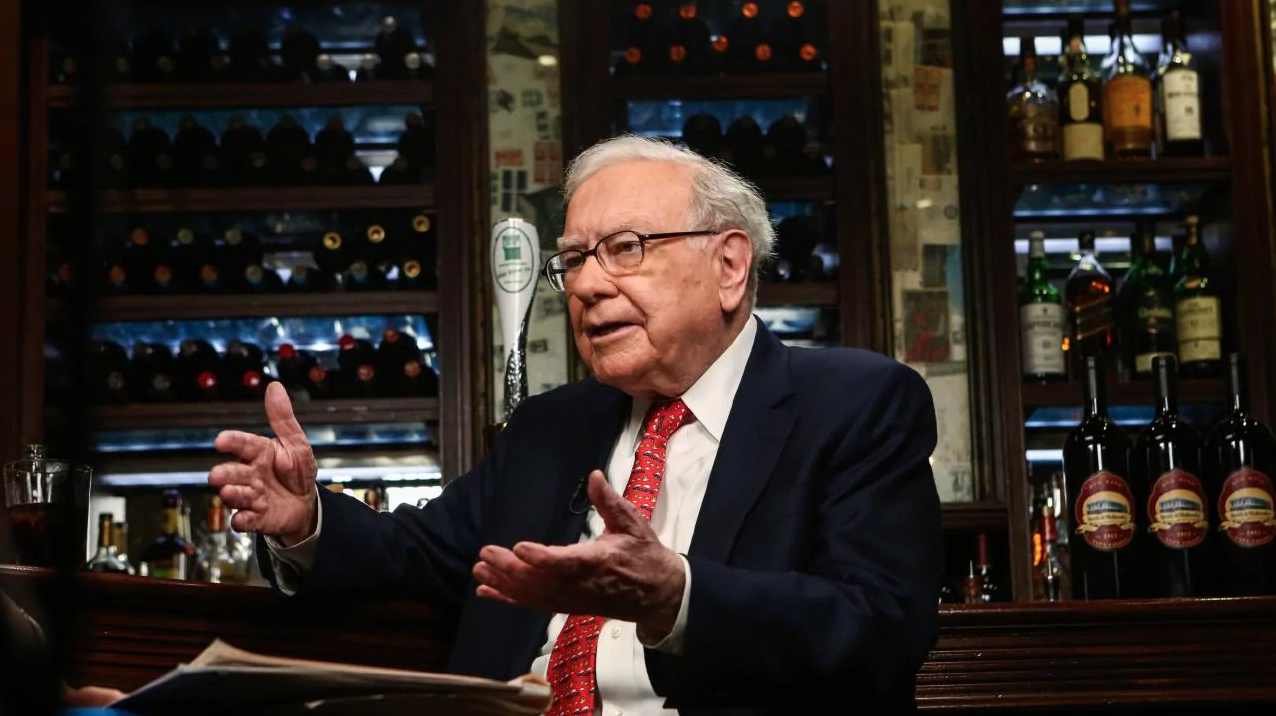 Warren Buffett: ‘Cash is holding position until you find something else.’ Picture: Bloomberg

With close to $US100 billion ($130bn) sitting in cash, Warren Buffett’s investment vehicle Berkshire Hathaway could be accused of having a lazy balance sheet.

But Buffett definitely isn’t suffering from investment inertia. He’s actively looking to reinvest his cash whenever a good opportunity presents itself. “I hate cash,” Buffett told a reporter recently. “But it’s a holding position until you find something else.”

In an interesting lesson for any investor, rather than hoarding cash as a safety measure in the current low-interest rate environment, the world’s greatest living investor is not afraid to take on risk.

Over the first quarter of 2018 Buffett’s company Berkshire Hathaway went on an Apple buying spree, buying a further 75 million shares in the technology company to lift the value of Berkshire’s overall stake to $US42.5bn. By late last week, as Apple shares hit a new high, that stake had increased in value by more than 9 per cent to over $US46bn.

In other words, there is nothing wrong with having cash on the sidelines.

There’s another good homegrown example. The Future Fund continues to downsize its cash position in favour of higher-growth equities. The fund, charged with managing the nation’s public service superannuation liabilities, dropped its cash holdings by around $3bn in the six months to December 31, to about 16 per cent of its $139bn portfolio.

With the Reserve Bank board this month again keeping the official cash rate locked at 1.5 per cent, and with little prospect of interest rates rising anytime soon, professional fund managers holding large amounts of cash should expect to be criticised by their investors.

So, do the trustees of Australia’s 600,000 self-managed superannuation funds deserve to be criticised on the same criteria?

Data just released by investment manager Vanguard and research group Investment Trends showed that, on average, most SMSFs are swimming in cash. Collectively, SMSFs are holding more than $170bn in low-interest cash and term deposit accounts.

Based on the total number of self-managed funds and the aggregate cash balance, SMSFs on average are holding about $287,000, representing a high 24 per cent of their total portfolio assets. Of the $170bn total SMSF cash pool, about $50bn is money classified as excess cash. This means they have earmarked about a third of their total cash holdings to invest in higher-earning assets in the future, but are still choosing to keep most of their powder dry.

The problem is, most have done nothing with their cash for years, which means they keep missing the boat as opportunities come and go.

What are the key reasons that SMSF trustees tend to cite in explaining why they are holding big sums of cash? Keep in mind that 50 per cent of all SMSF trustees are aged 65 and older, and are in pension drawdown mode. They hold about $360bn in assets, and are very risk averse. 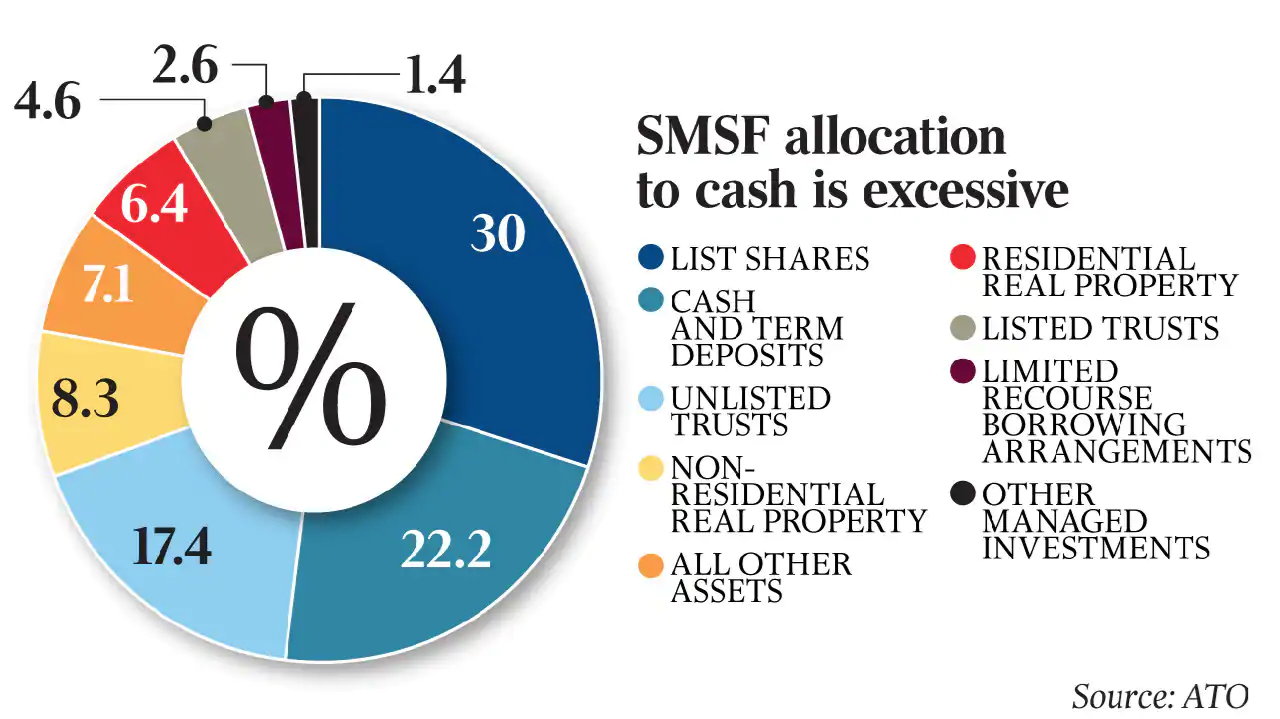 Inevitably, their focus is on reducing risk, wanting a guaranteed income stream and liquidity in retirement, and they are generally fearful about being invested in equities.

How much cash is right? As an investment class, holding excess cash is ultimately a losing strategy. Once inflation is taken into account, especially when combined with record low interest rates, all investors holding cash are seeing the value of their capital eroded. The longer it’s held, the less purchasing power it has.

Yet, it does make sense for every investor to have a portion of their portfolio in cash to cover for possible contingencies. Most financial advisers will recommend holding at least six months’ living expenses in cash that can be accessed at any time.

This strategy will not only reduce the need to sell assets during a downturn, but provide breathing space to rebuild capital. For those wanting extra safety, a strategy could be to keep a proportion of cash holding in an at-call account and additional cash in term deposit accounts earning higher rates of interest.

By staggering the maturities of term deposits investors can align their cash flow with their personal requirements.

What many retirees are ignoring is the array of equities-based financial products — including actively managed income funds and listed income-focused exchange-traded funds — that are consistently achieving good returns through highly targeted investment strategies.

In many cases, annual returns are more than double the 3 per cent rates currently on offer through products such as three-year bank term deposits. Advisers suggest that is where income investors such as retirees, wanting consistent, long-term returns should be focusing. Retirees need to become more engaged with their investment portfolios, and more sophisticated in order to optimise their income.

While it used to be considered by many investors that, when you were retiring you’d put everything into very safe, interest earning assets such as cash, that was never actually a very good idea.

What’s most important is to have a well-diversified, balanced portfolio of all asset classes that is proportional to one’s overall risk appetite and time horizon.

Proper diversification enables individuals to add securities to their portfolio and lower risk, without sacrificing returns. The objective when adding more assets into a portfolio is to introduce ones that are not already held, or that make up a low percentage of the total portfolio.

In a nutshell, holding too much cash is bad for your long-term wealth.