The good, bad and ugly as companies queue up to list

The following article appeared in The Australian on 24 July, 2018

About 50 companies have hit the ASX boards so far this year, with a number having delivered strong gains for their starting investors and others having severely disappointed.

Yet, despite volatile market conditions, there’s no shortage of companies lining up to list on the Australian Securities Exchange, and equally a long line of investors wanting to buy into the prospect of making a healthy profit.

In what was Australia’s largest 2018 initial public offering to date, all eyes were recently on the $5 billion float of Viva Energy, which listed on July 13.

Viva, controlled by the Dutch-based Vitol group, owns an Australian petrol refining and fuel supply network encompassing more than 1100 retail outlets. Yet, while institutional and retail interest in the IPO was strong, the float was underwhelming. Viva is currently trading slightly below its issue price.

The Viva float easily surpassed the $240 million raised by iron ore and manganese producer Jupiter Mines before its April listing, and the $466m raised in May for the IPO of Wilson Asset Management offshoot WAM Global.

Then there’s the $160m that was raised in June by small business lender Prospa, which abandoned its IPO plans just hours before its listing time due to concerns raised by corporate regulator ASIC

Yet, while the total amounts being raised by companies is noteworthy, more interesting for investors is the returns that various floats have delivered. 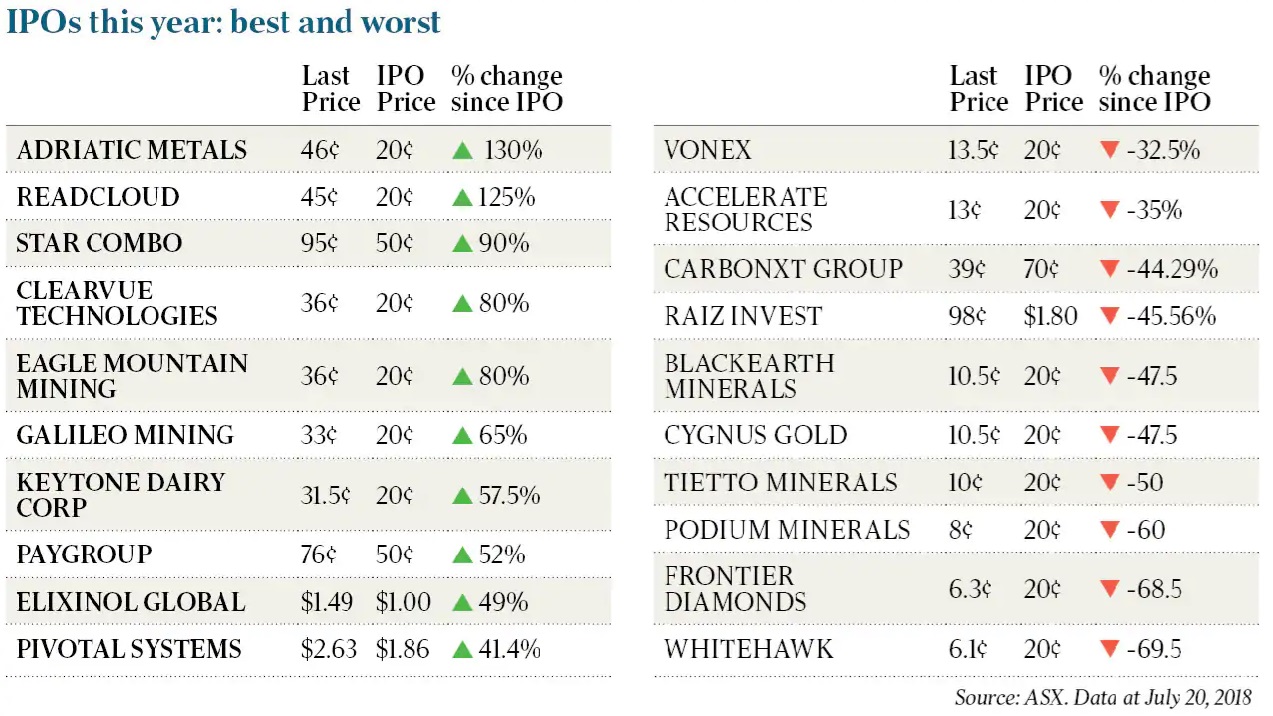 In 2018 it’s been a mixed bag to date, with listings from the materials and technology sectors continuing to dominate. The best-performing IPOs have all more than doubled since listing.

Heading the returns leaderboard since listing date is Adriatic Metals (ADT), a British company with a mostly Australian board that has mining concessions in Bosnia and Herzegovina.

Since listing in May after a $10m capital raising, Adriatic has surged a spectacular 130 per cent (as of July 20). That’s largely thanks to quite promising drilling results from its existing minerals deposits, which contained high readings for gold, silver, copper, lead, zinc and the barium source, barite.

Another top performer has been Australian educational technology company ReadCloud (RCL), which raised $6m before listing in February and has since jumped 125 per cent, including 35 per cent on day one. ReadCloud provides an e-learning platform to secondary schools for e-books, and currently has about 22,000 users around Australia.

Making up the top three is the health supplements and beauty products manufacturer and distributor Star Combo (S66), which since listing in May has gained 90 per cent. The Sydney-based company raised $7m, and on its listing day rose 58 per cent.

Star Combo was established in 2004, and distributes across Australia and Asia.

Not all IPOs are a raging success, and these three stocks currently make up the bottom ranks in terms of returns since listing date.

US cybersecurity company WhiteHawk (WHK), co-founded by former deputy head of US naval intelligence Terry Roberts, has failed to impress since raising $2m and listing in January. That’s despite a strong market debut, with the stock rising 32.5 per cent on day one. But since then WhiteHawk has fallen back sharply, and is trading 69.5 per cent down.

Frontier Diamonds (FDX), a South African diamond company, raised $4m in January before listing on the ASX, but closed 5 per cent lower on its debut and has continued to lose ground ever since. It’s trading 68.5 per cent down on its issue price, despite recovering the first gemstones from its operations in March.

WA company Podium Minerals (POD) listed in February after raising $6.6m to progress exploration for platinum, gold and nickel-copper sulphides in the state’s midwest. So far initial investors are out of pocket 60 per cent, although its maiden drilling campaign in June identified base metal and gold-­enriched layering at its Parks Reef prospect.

“We would expect that the IPO market will continue to show increased activity for the rest of the year in terms of number of listings driven at the small-cap end by the materials and tech sectors,” says partner Marcus Ohm.

In terms of resources company floats, Ohm says the main drivers are improved investor sentiment and expectations of continued increases in commodity prices.

“The improved sentiment in resources IPOs has developed off the back of some excellent returns on share prices throughout 2017, especially from the traditional mining states of WA and Queensland,” he says.

“Good commodity prices as well as the good share price performance of resources IPOs last year should continue to support an active time ahead.”

Ohm says the key challenge for technology companies is ­accessing investment capital when they don’t have defined cash flows.

“Australia’s listing environment is quite favourable in that ­respect as the listing requirements (given our strong history in resources, for example) don’t require positive cash flows or profits to list,” he says.

On the outlook for IPOs this year, he sees a continuation of the same trends.

“We think, based upon the numbers so far this year, that the IPO market will continue to be well represented by materials and, to a lesser extent, tech listings.”