Interest rates moving higher, whether RBA plumps for 'stability' or not

The following article appeared in the Australian on 5 June, 2018

The Reserve Bank board will meet again later today and will leave the cash rate frozen at 1.5 per cent, marking 22 months since we last saw any change in monetary policy.

That’s my firm tip, along with many others pundits, and don’t expect an official rate rise any time soon for that matter.

However, the RBA’s dogged stance on rates hasn’t stopped a bevy of lenders, including the major banks, from moving their interest rates higher over recent months.

Data commissioned from financial comparison site Canstar shows there have been more than 500 individual mortgage-rate product moves by banks and other lenders since the start of this year. That’s a phenomenal number of rate changes in an environment in which official rates have not moved anywhere for almost two years.

The retail rate changes have included about 240 adjustments on owner-occupier mortgage products, and a further 300 on investment property loan products.

Of these changes on owner-­occupier loans, 62 per cent were increases, with most of these rises tied to fixed-rate loan products of varying durations. There have also been rate rises in a number of ­variable-rate products, including on owner-occupier principal-and-interest and interest-only loans.

On average, lenders have been increasing their fixed and variable rates by about 10-15 basis points. However, some have lifted them by as much as 30 basis points (0.3 per cent). While it is still possible to grab fixed-rate loans below 4 per cent, even on periods of up to three years, they are becoming harder gems to find. 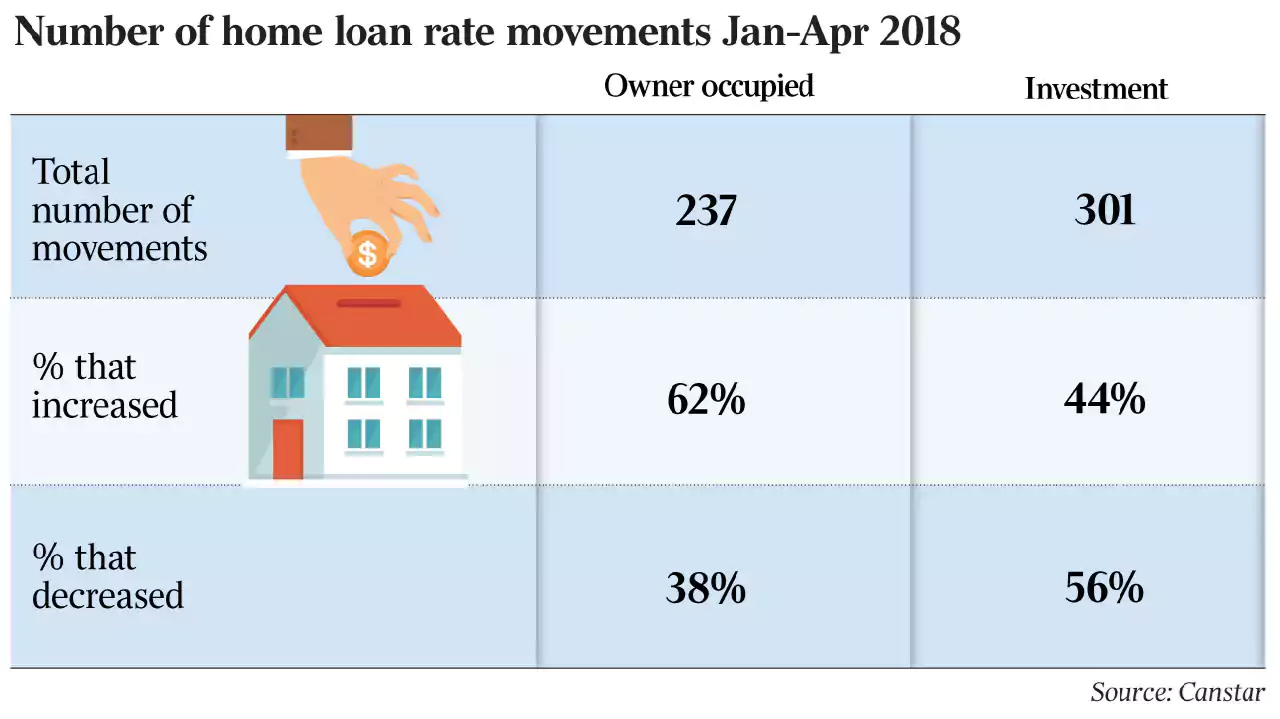 In the interest-only investment loans space (the prime target of the Australian Prudential Regulation Authority’s lending clampdown), the rate moves have been mixed, ranging from cuts to rises. Most interest-only loans are between 4.5 per cent and 5.5 per cent, but some are being priced closer to 6.5 per cent.

For property investors, what’s interesting is that in the investment-loan space, the trend has largely been down, with 56 per cent of the total changes recorded as decreases. But that has evolved in a climate in which lenders have been forced to reduce their investment-loan books through tighter approval processes, including lowering their loan-to-valuation ­ratios.

So, what’s really going on?

A lot of the changes are purely a reflection of retail price competition, with lenders often playing a cat-and-mouse game to win new business, either directly or via mortgage brokers.

Yet, especially in terms of fixed-rate loans, there is also the added dimension of increasing offshore funding costs stemming from the recent rises in US official interest rates.

The Canstar data shows that variable rates are generally down for owner-occupied principle-and-interest loans, but borrowers with owner-occupied interest-only loans are the part of the market most vulnerable and most likely to feel any RBA rate rises.

So although variable rates are still a preference for borrowers, fixed rates are worth considering.

“This year and next, our central scenario remains for the Australian economy to grow a bit faster than 3 per cent,” RBA governor Philip Lowe told a dinner in Adelaide this month.

If there were a gradual lift in wages and inflation, and a lowering in unemployment “it is reasonable to expect that the next move in interest rates will be up”, Dr Lowe added.

“The board’s view is that while this progress is occurring, the best contribution we can make to the welfare of the Australian people is to hold the cash rate steady and for the Reserve Bank to be a source of stability and confidence.”

But the official view on rates is certainly not deterring lenders from taking matters into their own hands, and raising them as they see fit.

For current and potential borrowers, including investors, it will be just as important as ever to shop around and consider locking into a low fixed-rate loan to counter further upward moves at the retail level.