The following article appeared on FS Advice on 31 May, 2018

The ongoing reputational impact of the Royal Commission, combined with a housing downturn and the growing threat of mortgage stress, is increasing the risks for the banking sector.

Australian banks enjoy a unique place in our society which is unlike anywhere else in the world. While the global financial crisis destroyed many banks globally, the oligopoly of ANZ, CBA, NAB and Westpac not only survived but thrived in the years following.

The big four banks proved resilient for a number of reasons. Unlike many smaller players, they were able to raise short-term capital thanks to their strong credit ratings and low exposure to non-performing loans. Government intervention also supported the sector, with a three-year uncapped bank deposit guarantee in November 2008 helping to bolster savings rates.

During the GFC, banks also took the opportunity to acquire smaller players. Westpac took over St.George, CBA took over BankWest and NAB took over the mortgage arm of Australia's biggest non-bank lender, Challenger.

There is no doubt that Australian banks' position is a powerful one. Many Australians choose a bank for life and when it comes to taking out a mortgage on our family homes, 85% of property investors and 80% of homeowners opt to borrow from a big four bank1. As a result, these businesses have long been considered a 'safe haven' for investors drawn by their stability and attractive yields.

While the larger banks have enjoyed a stellar run, there is no doubt that headwinds for the sector are mounting. In recent weeks regulatory risk has been on the minds of investors due to the Royal Commission, but there are other factors at play, not least the growing threats to the banks' share of the $1.6 trillion residential property market.

There have been no major new entrants in the home loan space in recent years but consolidation among smaller institutions and the increased use of brokers is boosting competitive pressures in the industry.

Further, there are mounting concerns that Australian households are now among the world's most indebted (see Chart 1). 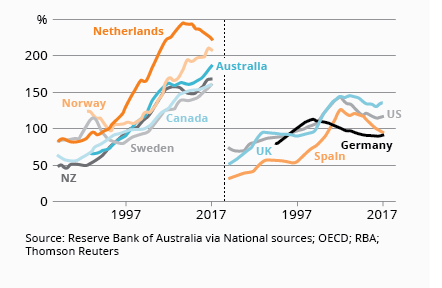 Such high levels of household debt, coupled with the recent soft landing in property markets, have been key factors in the Reserve Bank of Australia's (RBA) decision to keep interest rates on hold for time being.

However, the era of cheap debt cannot continue indefinitely and it is a matter of when, not if, the RBA will begin to increase interest rates. The key risk for banks will be that when this occurs, the trend in non-performing housing loans is likely to be upward.

The threat of open banking

Another significant threat banks are facing is the push by the Productivity Commission to implement one of the world's first open-data systems as part of its review into competition in the financial sector.

In November 2017 the Government announced that it would legislate a Consumer Data Right, giving consumers more control over their personal data, with the banking sector one of the first cabs off the rank. The establishing of an open banking regime will provide greater choice for consumers, allowing their data to be safely shared within the financial services sector.

According to Treasurer Scott Morrison, the new rules will disrupt the major banks' 'stronghold' on information and encourage a new wave of fintech innovation. This is likely to challenge banks' market dominance in the coming years and force them to re-evaluate their business models.

In our view, while the legislation is likely to encourage more fintech players into the market, the bigger risk for the banks is likely to be from large, global technology players that have the resources and established relationships to compete.

What does this mean for investors?

In our view, the growing risks in the banking sector mean banks no longer represent the stable, reliable sources of income they once were.

Our recently-launched active ETF, the InvestSMART Australian Equity Income Fund (INIF) is designed to deliver investors income without sacrificing capital gains. INIF has an exposure of around 9% to bank stocks compared to about 20% in the ASX200.

We believe that for investors who are tracking the index there are significant risks in being overexposed to what, in the present climate, are inherently risky businesses.

Banks are currently being hit from a number of sides - return on investment has been hit by government reforms, loan growth is lower than it has been for some time, there is the risk of bad debt increasing and technological risk is threatening the banks' current operating models. In addition, given the big four banks broadly move in tandem with each other, holding several of them will only go so far in reducing risk.

Therefore, while there is a case for having some exposure to bank stocks, we recommend a limit on total portfolio exposures of 20% and closer to 10% for conservative investors.