The following article appeared in Switzer Report on 17 May, 2018

How long have you held the stock?

We have only held Woodside for a few months, adding it to our Intelligent Investor Equity Income model portfolio in November last year and we topped up our holding in February’s capital raising. 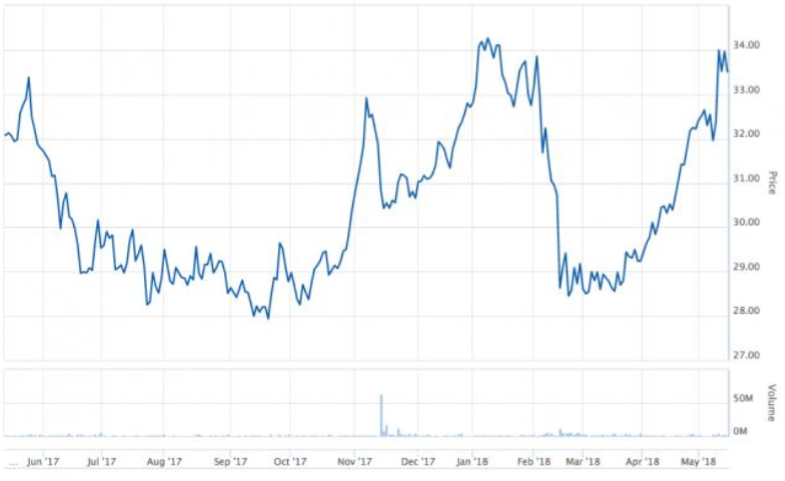 When we first bought Woodside, it was on the nose. Not many investors were interested in an oil and gas business with declining reserves and static production. Woodside had failed to replace reserves for several years and its production profile was bare. Looking closer, however, we thought the market was missing the value of the company’s infrastructure and the optionality this delivered.

Woodside wasn’t growing reserves but it did have world-class processing facilities that could earn higher returns with little capital expenditure, simply by running more gas through these facilities. The existing asset base was being undervalued by a market that only saw production as a measure of value.

We’ve also been impressed by well-priced acquisitions made at the trough of the cycle and discipline displayed closer to the top of the cycle. Investments in resources aren’t just about production or profits – capital allocation is a key skill that often gets ignored but can make or break resources businesses.

How is it better than its competitors?

Woodside is the lowest cost LNG producer in Australia, with high quality legacy assets and interesting looking growth assets. The economics of its projects are excellent and we think capital allocation – long a weakness of the industry – has been exemplary.

Mining and energy tends to attract optimistic folks and has historically emphasised production over return on capital. Woodside’s management has impressed with its disciplined approach to growth in the face of intense market pressure. We like the dull, cautious approach the company has taken and prefer to measure success by return on capital rather than output.

What is your target price?

Value, of course, depends on production and prices but we think the stock is worth north of $40 a share.

At what point would you sell it?

We have a disciplined approach to investing, which means that we buy stocks when they are cheap and sell them when they are fairly priced or overpriced. Woodside is far from that point but it’s important to continue to test your investment case. If Woodside strayed from its current path, for example by making a silly acquisition, we wouldn’t hesitate to sell the stock.

How much has it added to your overall portfolio over the last 12 months?

We’ve bought it in a few tranches and its now about 4.7% of the fund.

Where do you see value?

Woodside has risen about 10% since we bought it, so it is no longer the bargain it was but with oil prices now higher and new projects confirmed, it is still attractive today.

Important: This content has been prepared without taking account of the objectives, financial situation or needs of any particular individual. It does not constitute formal advice. Consider the appropriateness of the information in regard to your circumstances.