A road to big returns, minus the volatility

One of the greatest frustrations for private investors is the lack of access to infrastructure, an asset sector that has pumped up returns for larger super funds over many years.

Written by Tony Kaye, the editor of Eureka Report, which is owned by listed financial services group InvestSMART, the following article appeared in The Australian on September 25, 2018.

One of the greatest frustrations for private investors is the lack of access to infrastructure, an asset sector that has pumped up returns for larger super funds over many years.

Yet the road to infrastructure investing has become a lot easier for retail investors in recent years, with a plethora of listed shares and unlisted funds now available to those wanting exposure to this asset class.

Indeed, more SMSFs and private investors are finding ways to get into infrastructure assets such as airports, toll roads, regulated utilities including electricity, gas and water companies, as well as ports and railway networks.

These are typically privatised assets, sold off by either national governments in Australia and overseas, or by state governments and territories.

The attraction is that infrastructure assets provide investors with relatively predictable and stable cashflows over the long term, which due to contractual arrangements are often set to rise in line with inflation. As such, these types of assets are less prone to broader market volatility. 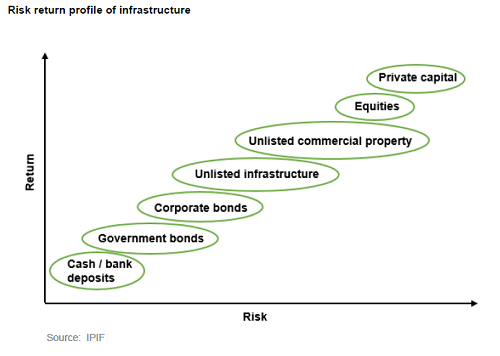 But a key question for all investors is whether it’s better to access infrastructure via listed companies on the ASX, or whether a better and less volatile course is through an unlisted infrastructure fund?

“It is possible to invest in infrastructure through direct shares or a managed fund, giving investors access to the advantages that this asset class offers, including a very attractive risk return profile with strong growth upside,” says 4D Infrastructure chief investment officer Sarah Shaw.

The reason, says Shaw, is that investing in listed infrastructure gives access to the same underlying asset profile as an indirect or unlisted exposure.

The main differences are in how an investor owns that asset profile, or how they gain exposure to the fundamental assets.

Investors in listed investments, rather than unlisted, generally benefit from:

“Infrastructure, and particularly unlisted infrastructure, is attractive due to its typically stable, reliable returns and low correlation to equities. In a retail portfolio it sits between government bonds and equities in terms of risk return,” she suggests.

Unlisted infrastructure funds also tend to have exposures to a broader spread of assets, some of which are not available through listed securities.

For example, investors can readily access Sydney Airport and Auckland Airport shares on the ASX. However they can gain a much broader exposure to airports through unlisted funds that have indirect holdings in Melbourne, Perth, Brisbane, Adelaide, Launceston and other privatised domestic airports.

Another benefit of many unlisted funds is their exposures to offshore infrastructure assets in Asia, Europe and the US.

Connolly says unlisted infrastructure investments account for between 7 and 12 per cent of major institutional investor portfolios, with the Future Fund having around 7 per cent ($11.7 billion) allocated to infrastructure and Australian Super 12 per cent.

Unlisted returns have historically been around 9 per cent per annum, which is more than the yields from Australia’s top dividend stocks of the big four banks and well above term deposits.

“Couple this with the recent uncertainty over the future of franking credits and dividends and it is little wonder that more investors are increasingly considering the predictable and consistent returns of unlisted infrastructure,” Connolly adds.

Meanwhile, 4D Infrastructure’s Shaw says active management is particularly important when investing in infrastructure to position for all points of a macro economic cycle.