Why we're looking to launch an Ethical Fund

Portfolio Manager, Nathan Bell explains what ethical investing actually means and why it pays off.

When I was originally asked about the merits of launching an ethical fund, I was sceptical. The last time I’d heard such enthusiasm for ethical funds was right before the GFC.

When investors are flush with cash, it seems they want to feel good about it. During bear markets most people don’t care what stocks you own. They’re so tired of watching stock prices fall they just want you to end the pain – ‘Make me some money, anyway, anyhow.‘

As I thought more seriously about investing ethically, I did two things. First, I considered what ethical investing actually means.

Ethical investing falls under the ESG acronym. According to Wikipedia, ‘Environmental, social and governance (ESG) refers to the three central factors in measuring the sustainability and ethical impact of an investment in a company or business. These criteria help to better determine the future financial performance of companies.’

The key point is that it’s not just about avoiding high polluting companies. How many times have we seen disgraceful corporate and individual behaviour go unpunished while shareholders foot the bill? Think cigarette companies, or James Hardie and asbestos claims. The Hayne Inquiry is only the latest attempt to expose unethical behaviour, which seems to grow along with bull markets.

John Kenneth Galbraith referred to corporate larceny as ‘the bezzle’ way back in 1955 in his classic book, The Great Crash 1929. Only now, it seems, have we reached a point where we can have an impact calling out bad corporate behaviour. It’s hardly surprising that Hayne singled out National Australia Bank’s top brass when 88% of shareholders voted against the company’s remuneration report last December. Shareholders want action.

It makes sense that ethical companies should have better survival rates and produce higher returns over long periods, as they meet the standards expected of all stakeholders, from staff to shareholders and everyone in between. It’s hard to be loyal to a company that you don’t respect, whether you’re a customer or staff member.

Companies that don’t meet these expectations should wither and die in a capitalist economy, assuming there are suitable alternatives and switching costs are relatively low.

For example, Elon Musk and Tesla are upending the auto-industry in the biggest change it has faced since Henry Ford introduced the Model T, as countries led by Europe try to reduce pollution.

If you’re a long-term investor in an increasingly technological world of lower prices and returns, it makes sense to seek the admirable companies out. There’s enough risk to businesses without adding ethical concerns.

The second thing I wanted to know was whether investing in ethical companies would reduce returns. According to the Responsible Investment Association of Australia (RIAA), over the past 10 years responsible funds have on average beaten large cap Australian funds by 1.9% per year and the ASX300 by 1.4% per year. 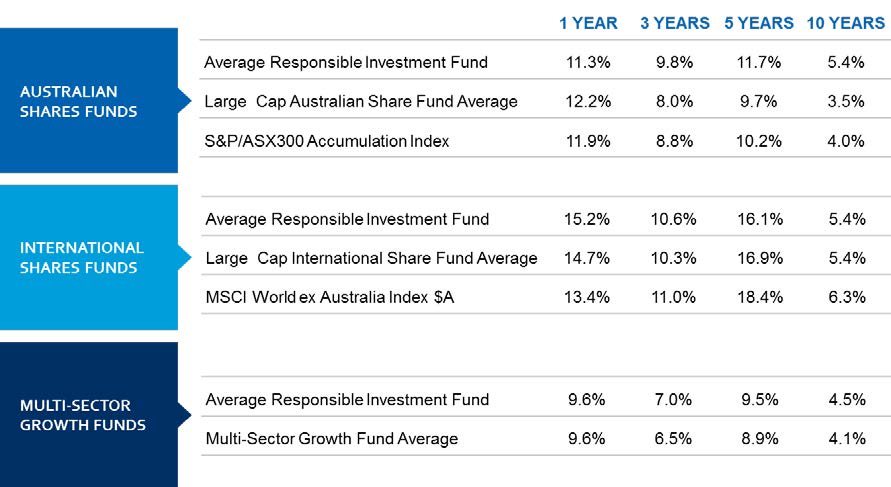 Unfortunately, this evidence has only been tested over the past decade, encompassing the longest US bull market in history. It would be much more reliable if the data was tested through several market and business cycles.

I decided to test the audited Buy recommendations of our online research provider Intelligent Investor, where I worked for nearly ten years. The last audited report was done as at 30 June 2018 including 409 recommendations stretching back to June 2001.

The 346 ‘ethical’ recommendations produced an average annual return of 14.8%, materially ahead of the 10.1% produced by the 63 recommendations considered unethical. Our experience also suggests investing ethically pays off^.

While we had successful calls in the resources space, including BHP, South 32, and Woodside Petroleum amongst others, it was also the source of some major losses.

In contrast to what I expected, based on our history, restricting stock selection to ethical companies should improve our returns. Furthermore, with companies like Woolworths considering selling its pubs to more closely comply with ethical standards, for example, the investable universe of stocks could increase over time.

That blue-chip staples like Woolworths are thinking this way shows that ethical investing is not a fad, but rather is becoming a normal part of company analysis. When ethical considerations form part of CEO remuneration you’re guaranteed to see change.

Whether it’s governments clamping down on industries, such as sugar taxes on soft drink companies (once thought of as some of the best businesses in the world), or competitors with new offerings (think renewables replacing fossil fuels), either the market or government is going to shrink your profits if you’re not ethical.

But just because a business is considered ethical doesn’t mean you should buy it. The reason our investors and subscribers have stuck with us for 20 years is because we think long-term and focus on value and quality. There’s no point buying an ethical business if it’s overvalued or its future cashflows are at high risk for fundamental reasons, such as increasing competition.

Our pragmatic approach has served clients well for nearly twenty years, and we expect that to continue. An ethical approach goes hand in hand with our value philosophy, which is why we’re looking to launch an ethical fund to complement our Growth Fund, Income Fund and Small Companies Fund.

If you would like more information on our upcoming Ethical Fund, click here. Be sure to register your interest for further updates.

^409 Buy recommendations as per the 2018 Recommendation Report published by Intelligent Investor were filtered using an ethical screen. Figures as at 30 June 2018; includes franking, excludes fees and costs.