Portfolio Update November 2019: The perfect microcosm of the macro

Six equity markets made new record all-time highs and closing highs, with another five within 2 per cent of their respective all-time highs. However, like July, there wasn't much rejoicing about the asset appreciation, in fact there was almost none at all.

I could almost copy and paste our report from July to describe the performance of November.

In fact, let’s actually do that. Here is what we said in July versus what happened in November:

July: We get the feeling that markets right now resemble that scene from Monty Python and the Holy Grail – “and there was much rejoicing”. Of the 23 MSCI developed equity markets, five of them made new record all-time highs and closing highs in July, while another six were within 2 per cent of their respective all-time highs. Yet there wasn’t really any major rejoicing when markets breached these levels. The most unloved bull market in global history is rolling on as more and more investors are being left behind in a wall of cash.

November differences: six equity markets made new record all-time highs and closing highs, with another five within 2 per cent of their respective all-time highs. However, like July, there wasn’t much rejoicing about the asset appreciation, in fact there was almost none at all.

Why? Economists, almost gleefully, point out that data is softening and 2020 has ‘risk’ written all over it. A point that we will come back to.

It is interesting how unloved this whole year has been, a year that is on track to be double the historical yearly average of the ASX and the best year of the past six by some margin. With one month to go in calendar year 2019, here is the performance of the ASX year-to-date compared to every other year going back to 2014. 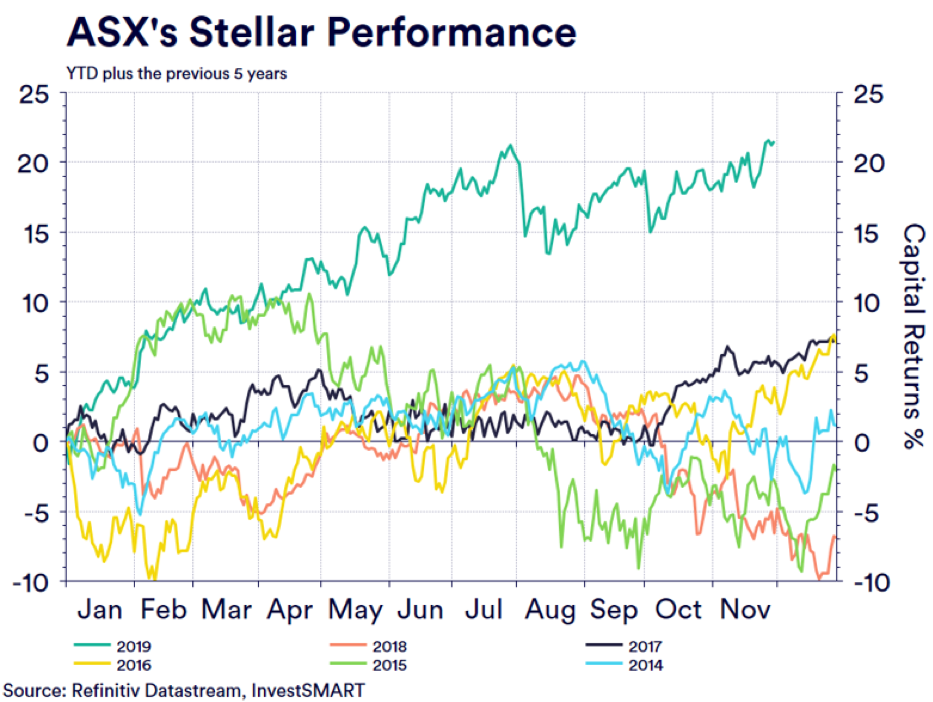 This chart perfectly highlights the theme of 2019, equities have seen monetary policy as the ‘cure’ to the malaise in the global economy and although no major central bank moved on their respective policy stances in November, most suggested they were ready to do so in the foreseeable future.

November actually had a perfect ‘microcosm’ intraday appreciation to this point.

The speech was a cracker and illustrated that although the RBA doesn’t believe Australia is even remotely near needing quantitative easing (QE), Governor Lowe did provide a ‘roadmap’ for the steps the RBA would take leading to a QE scenario. That road map included a further two cuts to the cash rate to 0.25 per cent and then purchasing risk-free rates (Australian bonds specifically the Australian 10-year bond) and some corporate listing, a huge level of stimulus. All recent data suggests this scenario is more of a possibility than the RBA is giving it credit for and why asset prices are beginning to expanding rapidly.

This speech took place after the ASX closed. The next morning, global markets were and had been completely flat, the ASX however jumped over 0.9 per cent. The gains were broad based  and non-sector specific, the only cause of such a move was the market’s pricing of further interest rate cuts and possible QE from the RBA in the next 12 to 24 months.

This raise a very large investment question, if the slowdown is temporary and as the RBA states “appears to have reached a gentle turning point”, is 2020 the year that could reinflate? It is certainly possible.

If the global recession that has been forecasted for almost 18 months now, never actually materialises, asset prices will be well north of current levels.

The past three months is testament to this. Property prices in November grew at the fast pace in 30 years in Melbourne and Sydney. Estimates see property increasing in value by 15 per cent in 2020. Estimates for the ASX in 2020 are just as strong and most believe the 7000-point mark will be breached for the first time in its history.

We should point out that 2019 has been an abnormal year of returns. But when you consider the historical average return of the ASX is 9.6 per cent, coupled with (likely) further RBA stimulus, slightly better than forecasted economics and an improving housing market, this points to 2020 seeming like a positive year in markets.