Income - can you have too much of a good thing? A few unexpected things happened in markets last week. The market fell by about 5% which in itself wasn't too bad. The interesting thing was what fell most and why. Banks fell by a little over 6%, while resource heavy small company shares fell by just 3.5%.

Income – Can you have too much of a good thing?

Income investors need to think more carefully about the trade off between risk and income
A few unexpected things happened in markets last week. The market fell by about 5% which in itself wasn’t too bad. The interesting thing was what fell most and why. Banks fell by a little over 6%, while resource heavy small company shares fell by just 3.5%. Some of the worst performing funds were ETF’s promising high levels of dividends. 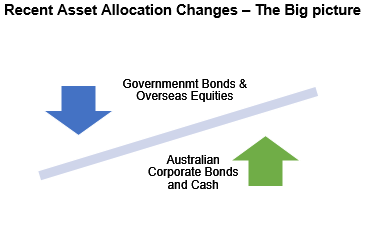 This could be dismissed as a very short term blip but it is worth also bearing in mind that over the past 4 weeks banks shares have fallen by around 16% while the market was down 6%, which starts to feel a bit more serious. At some point this will result in banks becoming cheap but for now the volatility points to deeper issues.

Government bonds were also down , albeit by 1-2% depending on their maturity (as is often the case longer dated bonds fell by more). However, investors sometimes assume that bonds will do well when equities fall, but it’s not always the case.

In the past there was also no difficult trade-off to manage as income was synonymous with defensive attributes. The highest yielding assets were fixed income investments.

So what has been driving the change in yields and these more counter-intuitive trends recently?

The long term picture is that back in 2000 investors were looking for, and believed in, high growth stocks. The dot com crash and especially the GFC has shaken people’s confidence and made them generally more defensive. A dividend now seems more compelling than the promises of riches far into the future.

More recently central banks have successfully forced down fixed income interest rates in order to stimulate lending and the economy. This may or may not provide long-term benefits and it has been great for existing holders of fixed income securities (prices rise as yields fall) but is not good for savers now.

Lastly, as the baby boomer generation approached retirement there are more people (probably more people like you) looking to invest to fund their retirement - income generating securities tend to be the first port of a call.

All this means that as an income investor you are now in the ‘hot’ part of the market and may be subject to the whims of other investors as well as the ability (and willingness) of central banks to keep rates low. We saw this last week when concerns about a Greek soveriegn default aloing with positive economic news in the US (meaning interest rates might have to rise sooner) effectively caused Australian bank shares and high income portfolios to fall.

What have we changed?

Given the changes in yields over the last few years, this portfolio already had a reasonable bias towards equities, so we haven’t changed that much. What we have done is to increase the yield slightly by increasing the allocation to relatively safe corporate bonds and decrease the allocation to Australian government bonds whose yields have fallen so much in the last year. Australian government bonds now don’t provide nearly as much income and they are starting to look a bit more volatile as the world starts to wonder if rates might rise again in the future. Even if this is a long time in the future it affects bond prices now.

Also, remember that the silver lining for income investors who are now forced to invest more in equities is that with greater equity exposure also comes the promise of more growth.

The other thing equities do better than fixed income is protect portfolios from the ravages of inflation. As the name suggests, payments form fixed income securities don't change in line with inflation so when prices rise their future buying power falls and hence the price people will pay for them now falls. Equities can suffer in the short term if this is due to inflation that doesn't come with strong economic growth but over the long term dividends will naturally rise with inflation.

Within equities we have increased the bias towards Australian equities, not so much because we think it is undervalued, but because the yield it offers is more compelling. (Most overseas markets don’t pay out as much income but their earnings might grow faster). Even more importantly is the impact of franking credits for local dividends which can add up to 1% for tax-exempt retirees.

This Income Portfolio is expected to yield about 4%, which we think is a realistic expectation given what the market is currently offering. Anyone promising much more than that is probably cutting a few corners and the market may question the sustainability of the income or its capital performance in a rising interest rate environment. This is what has made some of these yield chasing ETF’s perform so poorly in the last few weeks.