'tis the season to be jolly and, for people like us, it's time to make ridiculous assertions about where we think markets will be in a year's time.

'tis the season to be jolly and, for people like us, it’s time to make ridiculous assertions about where we think markets will be in a year’s time.

One survey that you might have seen in the papers this time last year had various pundits predicting that the S&P/ASX 200 Index would be somewhere between 5775 to 6400 (that’s the lowest and highest of their predictions) by the end of 2015.

It’s been a fairly hectic year but not the worst ever and, all things considered, the market has held up fairly well. It was at around 5000 a year ago and that’s about where it is now. Not one of the pundits was anywhere near the mark. Did no-one think that even a flat year was possible after a 5-year rip? What is perhaps more interesting is what these guys predicted a year ago and what the reasoning might have been at the time and what’s different now? 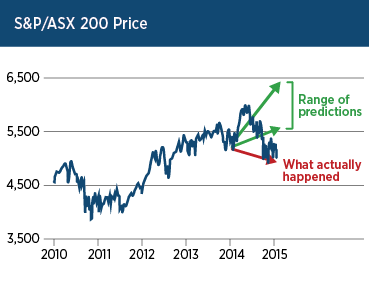 The range of predictions in that survey was for a growth of 15-30%, which is pretty optimistic, and probably assumed that the bombed-out resources sector would rebound. Lesson number 1 in forecasting returns: be particularly careful when your forecast relies on specific events to happen or not happen. This means that making predictions about the Australian market is more difficult than for the world equity market, or even the US market for that matter.

The same survey asked strategists what they thought the US market would do and the estimates ranged from 4%-12% growth in the market and there was probably a bunching of forecasts around 8%-9%. As it turns out the US market was up around 4% for the year and most strategists were wrong but not by as much. This might just be a coincidence but the numbers being forecasted and the tighter band for this more diversified economy hide a clue.

We can be reasonably sure that the forecast numbers this year will be very similar (that’s my prediction anyway) because most forecasters don’t know what’s going to happen in the future. Their solution: give the long term number and hope that it will be right more often than not. In fact, while these forecasts may well be reasonably close to the mark on average over, say 10 years, it’s really pot luck over shorter time frames.

The following chart gives you a sense of just how variable annual returns can be and how much narrower the range gets when you give yourself a bit of time to even out the unexpected ups and downs. Lesson number 2 in forecasting equity returns – give yourself plenty of time to be right. 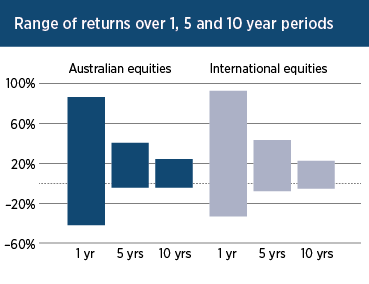 So what do we think the long term number should be in Australia? Well, we can’t help skirt around the question and we’d have to say that the answer is scenario dependent. Assuming we don’t end up in the middle of a global depression or that India doesn’t spark another commodity boom then we think the number is likely to be just south of 8% per year for the next 10 years, and a bit more than 8% for most investors who benefit from franking credits.

Interestingly we think that number will be significantly lower for the US market and that is why the InvestSMART portfolios are still investing more in Australia. Next week we will delve into what sits behind that 8% number in a bit more detail and then in the New Year we’ll talk about our projections for some of the other markets that the InvestSMART portfolios invest in.

In the meantime, and as it is the Season of Goodwill, perhaps don’t be too hard on the pundits and their 2016 market predictions but certainly don’t make any investment decisions on their say so either. A more generous way of reading them might be to understand that they are really trying to tell you something about their long term views.