Like Brexit, the victory by President-elect Donald Trump was a surprise. Unlike Brexit, however, markets quickly took a positive view and have continued to rise ever since. Investors are betting that Trump’s planned infrastructure spending and tax cuts will combine to pump up economic growth and eventually drive interest rates higher. And when the US Federal Reserve raised interest rates by 0.25% in December, it suggested that a further three rate rises could follow in 2017, reinforcing investors’ increasing interest rate expectations.

The portfolio’s top performer over the first half of 2017 was South32, which rose 78�ter an excellent underlying 2016 result. Rising commodity prices and further cost cuts have helped it rise materially above the $2.13 price it listed at 18 months ago after being spun off from BHP Billiton.

Nanosonics was the next top performer, rising 42% after announcing its first annual profit. Sales for the first quarter of 2017 also improved and there are now more than 9,700 of the company’s flagship trophon disinfection devices in use in North America, up more than 1,000 on the previous quarter. This growing ‘installed base’ is important as the company’s ‘razor and blade’ model means it makes its real money in the ongoing supply of disinfectant cartridges to its customers.

Computershare has so far been one of the biggest beneficiaries of the Trump surprise, rising 38% on hopes that the President-elect’s policies might eventually drive up interest rates. Computershare earns a substantial portion of its profits from the interest on client cash balances – at least when rates aren’t close to zero.

Another good performer was Ansell, which also rose 38% after its 2016 result suggested an improving outlook and management announced it was considering the sale of the condom division.

BHP Billiton rounded out the top give gainers, rising 36% as commodity prices improved and, with them, investors’ perceptions of mining and energy companies.

By contrast, iCar Asia declined 71%, making it the biggest fall in the period. Most of the damage was done early in the 2017 financial year upon the release of disappointing second quarter cash flow figures that pushed expected breakeven beyond 2018 and which was followed by a capital raising.

OFX Group (formerly OzForex) was the next biggest loser, falling 26% after reporting a 21% fall in underlying profit in its interim result. Low volatility in the Australian dollar compared to the US dollar has affected the number of new clients signing up while the fall in sterling since the Brexit referendum reduced the value of sterling-based transactions.

Even before Trump’s victory, infrastructure stocks and listed property trusts declined as investors feared higher interest rates in coming years. Along with the government announcing that the company would have to front more of the cost of developing a second Sydney airport at Badgerys Creek than originally expected, this contributed to a 13% fall in Sydney Airport shares.

On 1 September, the portfolio sold 1.0% of its holding in Trade Me because, at 8.5%, it had moved well beyond its maximum recommended weighting of 6.0%.

The proceeds were used to increase the weighting of Amaysim (at $2.04) by the same amount after it reported a good 2016 result.In late October, the portfolio sold its entire 3.5% weighting in ResMed (at $8.40), using part of the proceeds to increase the Crown Resorts holding by 1.5% to 2.9% at$10.70. The opportunity arose after some of Crown’s staff were arrested in China.

In order to maintain the portfolio’s resources exposure but reduce the skew towards South32, the portfolio reduced its holding in South32 by 1.4% to 4.5% (at $2.58), investing the proceeds in BHP Billiton to increase its weighting to 4.6% (at $24.23).

In late December, the portfolio also used some of its cash to add a 2.9% weighting in TPG Telecom, at $6.52. Like its competitors, TPG Telecom has suffered significant share price declines as investors fret over the impact on margins as the NBN ramps up 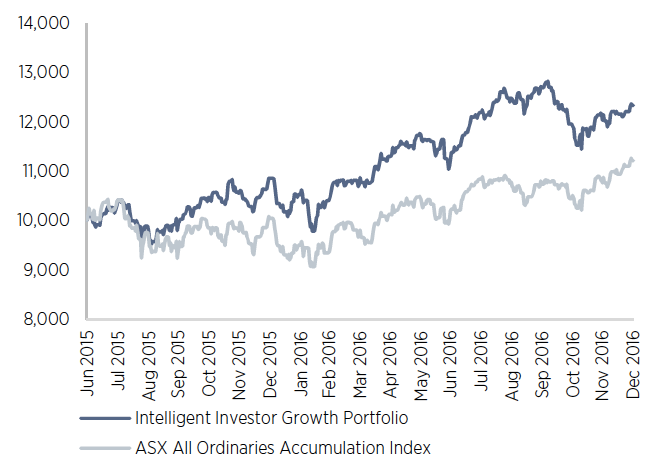 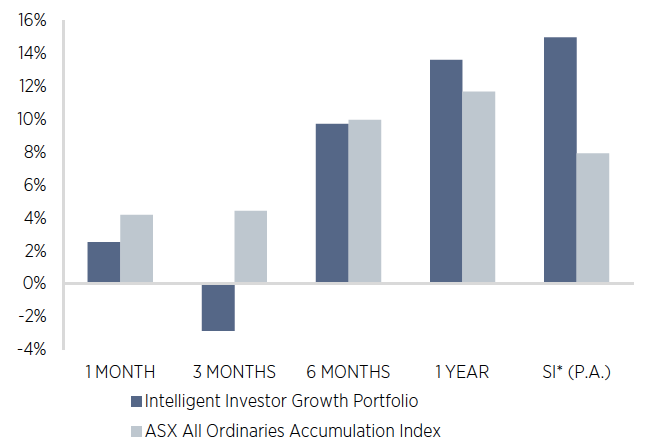