Leading the way was Ansell, which returned 18% in the month. Although the company reported a 14% fall in earnings per share, that was at the top end of the downgraded guidance issued in February. Management expects a return to growth this year and is considering selling off the company’s condoms business, to focus on the gloves and other protective equipment it sells to companies rather than consumers. That makes good sense and with an improving outlook we’re comfortable holders despite the 49% increase in the share price since we bought following February’s downgrade.

Computershare was another company that beat some downbeat expectations, returning 13% in the month despite an 8% fall in earnings per share. Management was talking up the prospects of its mortgage servicing businesses and talking down the threats from Blockchain and Brexit and the market evidently took some comfort. We take more comfort from the undemanding valuation – a price-earnings ratio of about 14 – and would consider increasing our holding if the price returned to below $9.

Two of our smaller stocks – Hansen Technologies (which produces billing software) and Nanosonics (which sells devices for sterilizing medial probes) – also performed well following results that highlighted their many virtues. Hansen gained 10% after increasing underlying earnings per share by 38%, while Nanosonics did even better, reporting a maiden profit and rising 14%.

Trade Me, our biggest holding, produced a result that suggested it too will soon be returning to growth after a few years of heavy investment. After nudging up 3% in 2016, we expect earnings to rise by 10% or more in 2017 – so apparently does the market, which pushed the stock up 9% over the month.

Interestingly enough – when set against the likes of Ansell and Computershare, which beat low expectations – one of the portfolio’s worst performers in August was Sydney Airport, which fell 6% despite flagging an expected 22% increase in this year’s distributions. The fall, though, says more about how far the stock price has already flown (it is up 64% over the past two years), rather than any problems with its results, which continue to be excellent. There’s no doubt that any rise in interest rate expectations will hit Sydney Airport hard in the short term, but we continue to believe that its combination of income and reliable growth will serve it well over the long term.

The biggest loser for the month, though, was iCar Asia, which halved after warning on revenues, producing a hugely disappointing result and, to cap it all, raising further capital. The capital will be needed to take it through to profitability – we hope – although we’d say that’s now unlikely to happen before 2020 (and it may not happen at all), so further funds may be needed at some stage. Safe to say that this is not one that’s working out how we’d hoped, but the damage is limited by its portfolio weighting of just 2.3% at the start of the month.

There were no transactions in the month, but the day after it ended we increased our holding in Amaysim from 3% to 4% following its impressive result and reduced our holding in Trade Me from 8.3% to 7.3%. 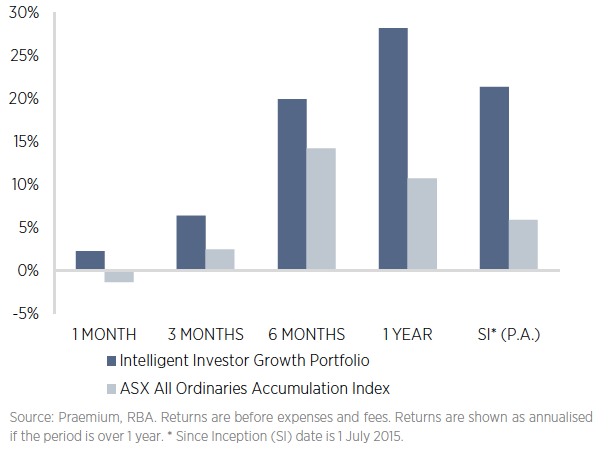