Today I want to discuss a topical question that I seem to be coming across continually from people interested in bonds, but due to this question, they are a apprehensive about investing in bonds. That question is: "Aren't bonds expensive right now, and is now even the right time to buy bonds if rates are likely to go up?"

Congratulations!
You now have access to Free InvestSMART Insights, we look forward to helping you on your financial journey.
You now have access to Free Eureka Report Insights. We look forward to helping you on your financial journey.
You now have access to Intelligent Investor Free Insights. We look forward to helping you build a market beating stock portfolio.
Looking for more…
Intelligent Investor Membership
15-day Free Trial
No thanks
Looking for more…
Eureka Report Membership
15-day Free Trial
No thanks
I want to discuss a topical question that I seem to be coming across continually from people interested in bonds, but due to this question, they are apprehensive about investing in bonds.
The question is:
“Aren’t bonds expensive right now, and is now even the right time to buy bonds if rates are likely to go up?”
Before I address the question, I want to set the scene for the current interest rate environment we are living in. Currently Australia is saturated with cheap funding, recently some lenders have even cut mortgage rates in a bid to capture more of the tight market. This is certainly a win for borrowers looking to leverage into Australia’s frothy property market.
However, for every smiling new homeowner there is a casualty of these historically low rates, they are the retirees and SMSF trustees that have to deal with deteriorating deposit rates as banks tap into more economical bond markets.
In early 2012 CBA raised $1.5bn via a ‘AAA’ rated covered bond at a cost of 4.44% per annum (based on current benchmark bank bill rates). Today that same money costs only 3.02% per annum, this is notably below typical term deposit rates.
Retirees and SMSF trustees are not helping themselves either; data released by the Australian Taxation Office (ATO), shows that SMSF cash investments had risen to a record $156.2bn during the March 2014 quarter, a 1.6 per cent increase from $153.7bn in the December 2013 quarter. Those cash holdings represented 28 per cent of all SMSF assets, which hit $558.6bn in the March quarter, up 2 per cent from $547.6bn in December 2013.
Given that inflation could head higher and cash rates could remain steady retirees & SMSFs are risking value erosion by being so heavily invested in cash. Annual inflation is currently running at 3% per annum, so the real returns on cash investments are close to zero, add in tax and you are in negative territory.

The RBA rhetoric indicates that it is not likely to raise interest rates anytime soon and banks have lowered rates on term deposits, Retirees & SMSF investors need to consider their options to protect against rising inflation.

So, with the scene set, let us discuss this common question. There is really two parts to this question:
To address the first question, Liz Moran, director of education and research at FIIG, recently commented “while bond prices are high, they are not at record levels. Combined with very attractive rates of return compared with other developed countries, Australian bond prices have scope for further outperformance.”

The Australian iTraxx index, which in simple terms quantifies the perception of risk in the market, is currently at an 80 basis points spread, this is elevated compared to pre-GFC levels when it was trading at around 30 basis points above the base interest rate. This shows that there is still room for spreads to move lower and ultimately for bond prices to improve further. 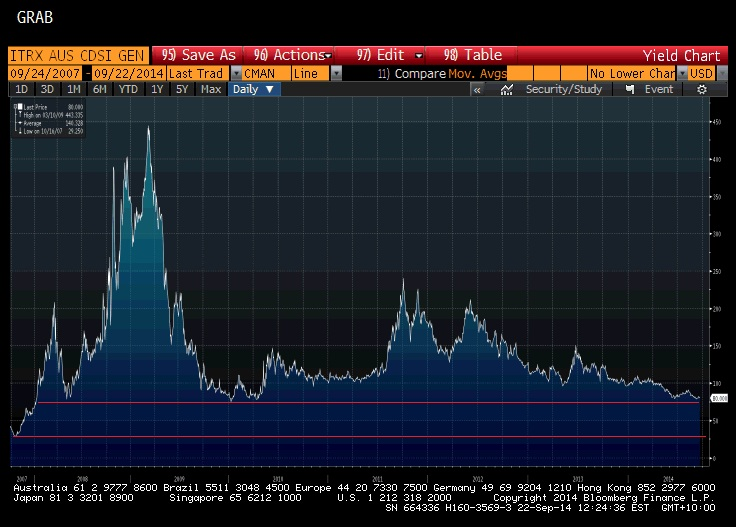 Moran goes on to say that, “Bond spreads and overall yields [in Australia] continue to move lower. Investors need to prepare for even lower yields as they compete against international investors for domestic bonds. A global search for yield and limited domestic supply should see bond prices continue to appreciate.”

To address the interest rate timing part of the question, markets are cyclical and interest rates at some point will rise but I expect they will be lower for longer. Earlier this year, all the signs pointed to rates potentially heading up. However, with Australian unemployment above 6%, developments in the Middle East likely to increase oil prices, the ECB moving to negative interest rates, and US Fed comments that they will likely keep rates lower for “considerable time”, as well as their downwards revised growth numbers and weak CPI data, all helps to reinforce the view of FIIG’s research department that rates will continue to be lower for longer.
No one is certain about the direction of interest rates, so I suggest you have an allocation to all three types of bonds: fixed, floating and inflation-linked. By following this advice, a well-balanced bond portfolio can provide a significant uplift in yield on cash compared to term deposits and ensures your portfolio fairs well no matter what the future brings.
My comment on timing the market with bonds is this; did you time your latest term deposit investment? More than likely not. Then why is there this belief that you must time and trade bonds? This is an alternative defensive asset to cash, not a growth asset that we are seeking to pick the best entry and exit. I suggest that you take the yield increase, invest and hold to maturity. Your bond portfolio WILL outperform term deposits.
By rebalancing a portfolio with ~30% in cash, to 10% in cash and 20% in bonds, the average SMSF with a $1m balance, assuming a yield increase of 3% per annum, could generate an additional $6000 per annum. Over a period of 10 years or more, this amount compounded, could dramatically change the way you choose to live your life.
If you would like to discuss anything I have raised in this article, or find out more about how you can invest into bonds, please feel free to contact me directly at angusk@fiig.com.au.