1. Despite all the bad news, diversification helpedInvestors were riding high in the first half of the year and it looked like we were heading for a bumper year, then it all got a bit trickier. Interestingly, markets shrugged off worries over the break-up of the European Union but the prospect of slowing Chinese economy really changed the landscape, especially in Australia. In the end, some asset classes still produced double digit returns.

1. Despite all the bad news, diversification helped

Investors were riding high in the first half of the year and it looked like we were heading for a bumper year, then it all got a bit trickier. Interestingly, markets shrugged off worries over the break-up of the European Union but the prospect of slowing Chinese economy really changed the landscape, especially in Australia. In the end, some asset classes still produced double digit returns. 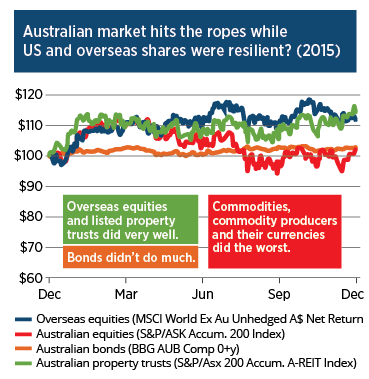 A decline in the Australian dollar means that your overseas shares (denominated in currencies such as US Dollars) became more valuable, regardless of the performance of the underlying companies last year.

In fact, if you look at the returns from the perspective of local investors in each country, Australian companies performed in line with global peers. 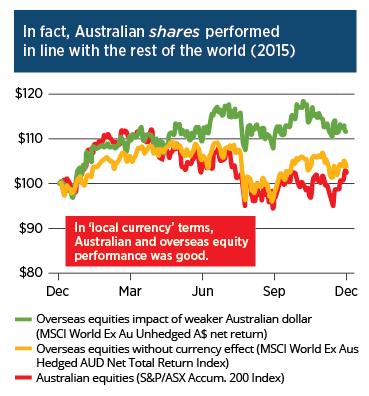 The real surprise to many readers will be the extent to which US equities lagged other regions. This runs counter to the narrative in newspapers that has focused on the improving US economy compared to a troubled European economy and a slowdown in Asia. As always we think valuation (how much people have paid for a dollar of earnings) holds the key to understanding this. The overall rationale in the minds of investors might be summarised as follows:

In this light it is therefore easy to see why the market has seen more upside in the world outside of the US and if you want to pay reasonable prices for some upside in your growth assets, this view still makes sense.

3. Australian shares did better than expected, knowing what we know now.

If we had been told that the iron ore price would fall by a further 40% and that the banks would be forced to raise capital then we might have expected a worse result from Australian equities, well into negative territory. Luckily valuations were already reasonable, meaning that the possibility of negative events was already priced-in, so that when they occurred share prices didn’t suffer as much. But most of all both listed and residential property held up well in the face of potentially higher interest rates.

4. Global growth surprised on the downside

The 2015 financial headlines have been dominated by the shocking and unexpected falls in the prices of oil, iron ore or the Chinese market. To underscore how unexpected these events have been, not one of 63 economists saw the Aussie Dollar buying just 69 US cents now when polled by Bloomberg a year ago. These could be billed as the surprise of the year but in reality they are all symptoms of the slowdown in global growth, or to be more precise the fact that China, Brazil and Russia contributed less than expected. 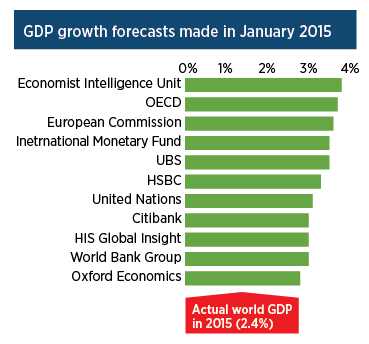 5. Perhaps the biggest surprise was that Australian diversified portfolios fared so well.

The InvestSMART portfolios all finished the year in positive territory and held on to some of the gains made earlier in the year. To put this in context the InvestSMART Balanced fund was up by over 6% for the year while a similar fund based in the US lost 2% over the same period. The Portfolios all achieved returns within 4-7% depending on their exposure to equities. Over the long term returns of 4-8% might be expected from diversified portfolios such as these, so all in all it wasn’t such a bad year in the end despite all the headlines. It was also a much better result than if you had just stuck with cash and some domestic blue-chips:being diversified paid off. 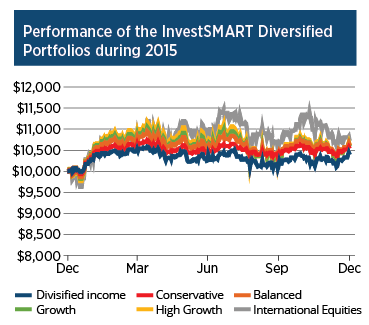