The following article appeared in the Australian on 30 January, 2018

The new assets test has become an acid test for many who were receiving a part age pension.

Almost 90,000 individuals and couples around Australia who previously received a part age pension payment completely lost their entitlements in 2017 as a ­result of the federal government’s changes to the pension assets test rules.

In addition, hundreds of thousands of individuals and couples who were previously receiving a full pension have had their payments reduced. The revised pension assets test rules also mean many Australians who had based their ­retirement income stream on receiving a part age pension in the future should seek out professional advice urgently to re-evaluate their financial position.

The Department of Social Services has confirmed about 86,600 part-rate age pensioners had their pension cancelled as a result of the assets test changes that came into effect on January 1, 2017. And, as we head into 2018, more retiring Australians will likely miss out on receiving any level of age pension.

The new limits on the amount of assets outside of a family home that could be held by couples or individuals before their pension rate was reduced was introduced last year as part of a wider plan by ­Financial Services Minister Kelly O’Dwyer to reform the pension and superannuation system. The amount of pension received is now reduced by $3 per fortnight for every $1000 over the new limits under the pension taper rate.

Using the latest official government data, it is clear that between the end of December 2016 and the end of June the number of recipients receiving a part age pension under the assets test fell from 486,031 to 321,106, a variation of just over 147,000. The DSS has claimed only part of that difference was due to the actual changes in the assets test, and that no full-rate age pensioners have had their pension cancelled due to the ­assets test changes.

How it works now

In terms of assessing the age pension under the assets test, the DSS data shows about 1.18 million recipients are couples owning a home. A further 660,000 are singles owning a home. These cohorts tend to have the highest value level of ­assets outside of their homes.

The pension assets test does not apply to the family home itself, but it does apply to its contents and any other assets owned, including property, vehicles, caravans, boats, superannuation holdings and funds in bank ­accounts.

Average superannuation balances at retirement already put many Australians close to or over the new asset test thresholds. But one of the biggest problems for those in this position is that having higher superannuation retirement savings may actually generate less tax-free income than those relying solely on the age pension. In other words, having more ­assets can potentially be a big disadvantage. 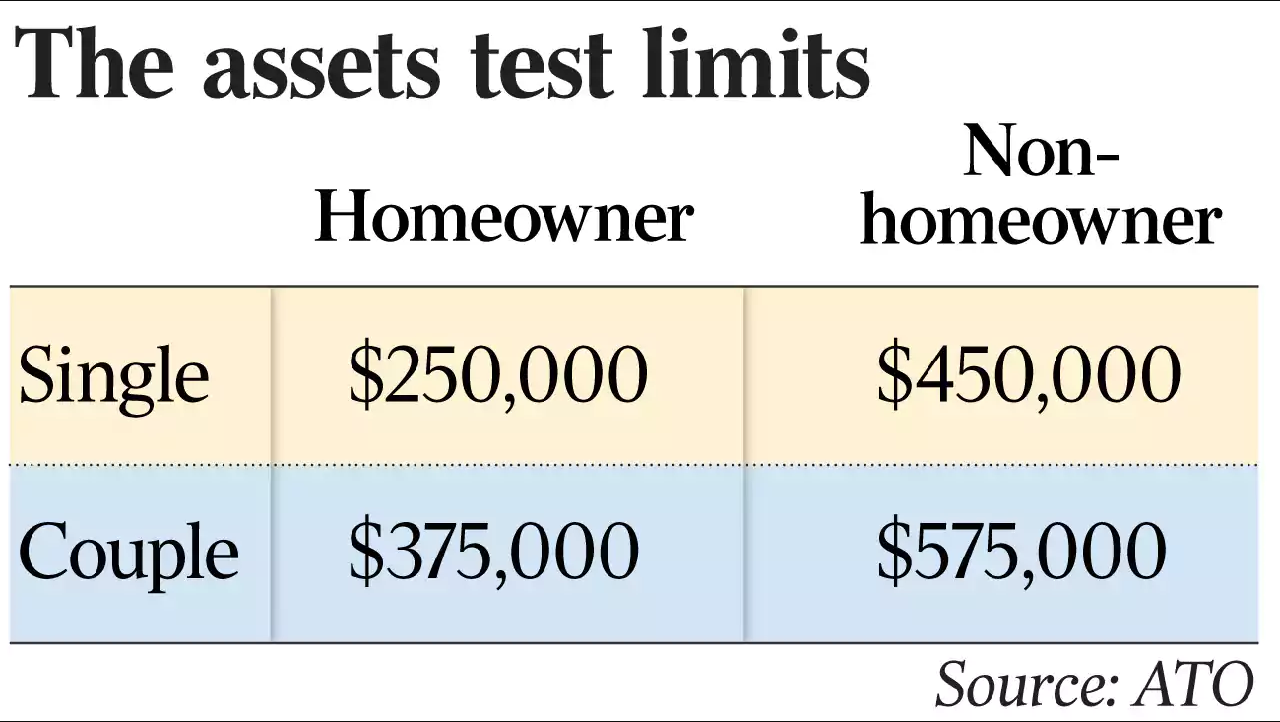 On current age pension rates, a single person receives $23,254.40 a year. A couple receives $17,529.20 each. A couple with $850,000 of personal assets outside their home is not eligible for any age pension, but based on a 4 per cent annual return they will need that amount saved to generate the same level of tax-free income as an individual or couple receiving the full age pension.

As such, the changes to the assets test could deter some individuals and couples from putting money into their superannuation, as even a couple can only hold $375,000 in retirement savings collectively ($175,000 each) before their age pension entitlement begins to fall. The alternative is to ­direct more capital into the principal place of residence, which does not count towards the assets test.

Data released last month by the Association of Superannuation Funds of Australia shows a retired single person needs $43,694 a year and a couple needs $60,063 to be considered as having a comfortable standard of living. To achieve that sort of income, ASFA says singles need $545,000 in their super and couples need $640,000. But having those levels of superannuation could put many singles and couples out of contention for receiving the age pension, depending on whether they own a home.

The assets test changes have led to some people moving around their financial assets so they can receive the age pension, including directing more money into their tax-exempt family home. There are various strategies to reduce your assets, but the secret is to maintain your standard of living using current income sources.

In effect, while low-income earners will get the full age pension as a matter of course, and high-income earners have too many assets to be entitled to any pension anyway, those in the middle income bands have been most affected by the asset test rules.