The InvestSMART diversified portfolios have had a bias towards growth assets for some time. With relatively defensive bonds offering such low yields this had made sense and for investors with very long term investment horizons this is probably still true. The problem now is that both bond and equity markets have performed so well and as a result the yields they offer have reduced.

The InvestSMART diversified portfolios have had a bias towards growth assets for some time. With relatively defensive bonds offering such low yields this had made sense. And for investors with very long-term investment horizons, the strategy probably still makes sense.

The problem now is that both bond and equity markets have performed so well and as a result the yields they offer have reduced. It is also a potential issue for investors that equities and bonds are tending to move together to a greater extent than we have seen in the last few decades, at least over shorter periods.

This is a direct result of central banks around the world keeping interest rates very low as they attempt to stimulate economies. This has worked to some degree but the strategy has had a greater effect on pushing up the prices of financial assets (bonds and shares) as well as other ‘real’ assets (such as property and infrastructure). These are called real assets as the dividends they offer should increase with inflation over the long term.

The graph below shows InvestSense’s estimates of forward looking ‘real’ returns (that is to say after inflation, which is currently expected to be a bit less than 2% in Australia over the longer term).

You’ll notice the grey line, which represents government bonds, has edged back to zero. This implies that over the long-term investors in government bonds will probably receive a negligible return after inflation while experiencing some volatility (short-term falls of 5-10% might be expected if it looks as though rates will ever rise again). For defensive investors with a short time horizon, cash looks like a more attractive option.

Equities on the other hand are promising OK returns of 4-5% after inflation.

But it should be remembered that equities have benefited from falling interest rates, which forces return-hungry investors to move money out of bonds and into equities. The flip side of this is that if rates rise equities will also fall – and probably by more than bonds.

The advantage of equities, however, is that dividends should rise later on if inflation turns out to be a bit higher than expected.

Those people with a longer time horizon and who are looking for higher returns will probably want to hold on to those equities, but they will need to be aware of the risks. They might have to endure some quite significant short-term falls, maybe as much as 20-30% over a year or two, especially if it looks like rates might rise in the future.

In the absence of very dramatic upheaval in markets, however, long-term investors certainly don’t want to miss out on that 4-5% premium over cash, the compounding effect of which can be significant over long periods.

Putting all this together, we have made the defensive portfolios more defensive by increasing cash levels in order to preserve some of the gains made in the last few years.

If bonds start offering better expected returns in the future and the outlook for equities settles (or they just get cheaper), we would expect to reduce cash levels.

The more long-term focused portfolios are holding a little more cash now and we will reinvest that if and when markets offer better value or if new investment opportunities come along (which is highly likely in the rapidly evolving Exchange-Traded Funds market that we predominantly use).

On the other hand, equities aren’t exactly cheap. If the outlook for growth deteriorates we’re standing quite close to the fire exit and you might see a marked shift towards a more defensive strategy.

Overall, we don’t necessarily see the market falling precipitously in the near-term but we feel that these changes are a prudent measure to ensure the funds continue to achieve their investment objectives over the long-term.

It’s certainly not a good time for a ‘set and forget’ style of investing and we’ll let you know if anything changes.

The changes being made to each portfolio are shown below: 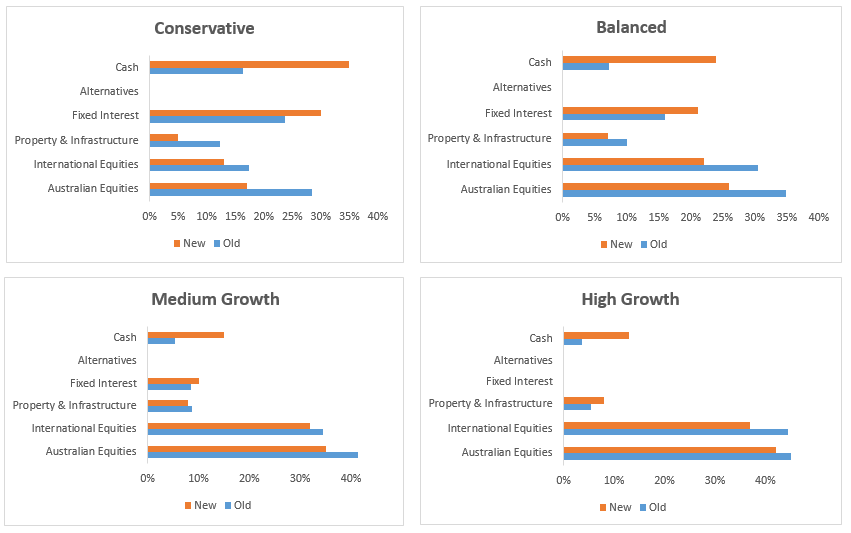 If you have any queries please feel free to contact us at admin@investsmart.com.au